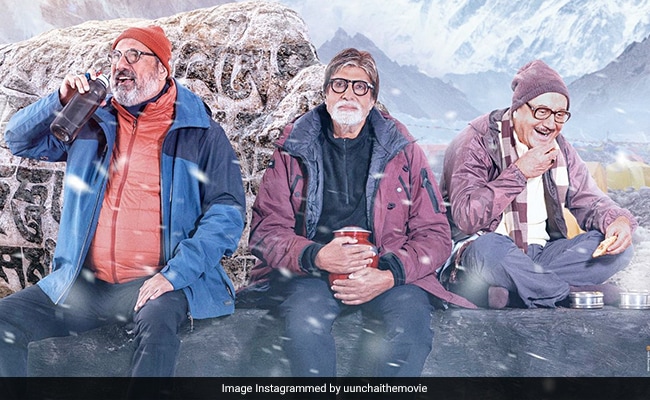 The eternal megastar of BTown Amitabh Bachchan shared the second poster of his film ‘Uunchai’ on his Instagram this morning.

The poster shows Amitabh Bachchan along with Anupam Kher and Boman Irani having a jolly time with the mighty snow-laden Himalayas in the background. The first look of the movie was released on Friendship day that was on the 7th of August. This made it clear that friendship is a big part of the story and mostly serves as the backbone of the story.

Even the tagline of the movie reads, “Friendship was their only motivation”. In the poster, Amitabh can be seen resting against an inscribed rock with Boman Irani while Anupam Kher eats some home-cooked food hinting at this being a family film. See the post below.

The first look which was released on friendship day showed the 3 veteran actors trekking on a snow-clad mountain while the Mount. Everest stood tall in their background. This is the first time Amitabh, Boman, and Anupam will appear on screen together. Furthermore, this film also stars  Neena Gupta and Sarika with Parineeti Chopra, Nafisa Ali Sodhi, and Danny Denzongpa in guest appearances.

The magnificent Himalayas as well the friendship trope among these stars is surely gonna be worth the watch.

Amitabh Bachchan will be next seen in ‘Goodbye’ with Rashmika Mandanna.