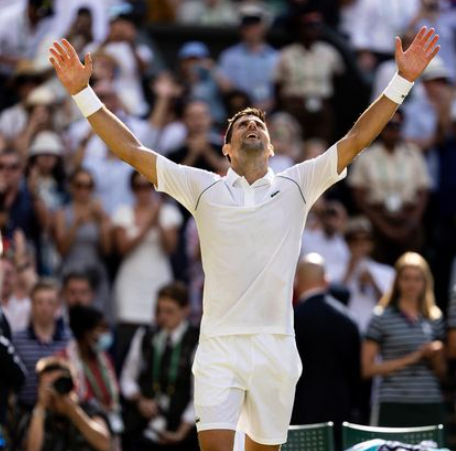 In the process, Novak Djokovic became the fourth man in the Open Era to record a streak of four consecutive Wimbledon titles – joining Roger Federer, Pete Sampras and Bjorn Borg.

His seventh title here overall means he is just one behind Federer in the all-time list.

In winning his 21st Grand Slam singles crown, Djokovic, 35, now stands one behind Rafael Nadal in the history of men’s tennis.

How the match went

Kyrgios, 27, was unseeded and playing in his first Grand Slam final.

Djokovic, playing in a men’s record 32nd Slam final, was blown off court by his 27-year-old opponent making his maiden bow.

Kyrgios raced through the first set, breaking in the fifth game and taking the opener with his seventh ace of the contest.

Djokovic, renowned as the best returner in the game and undefeated at the tournament since 2017, managed to win just four points off the Kyrgios serve.

It was the third match in a row at this Wimbledon that the 35-year-old had dropped the first set.

Djokovic’s turning point came when he won a 23-shot rally in the third game of the second set and immediately broke for a 3-1 lead.

Kyrgios then saw four break points slip away as Djokovic levelled the final by taking his first set off the Australian in three meetings.

Kyrgios saved two break points in the opening game of the third set.

There was a brief stoppage in play when a protestor was ejected from the stadium for shouting ‘Where is Peng Shuai?’.

This was in reference to the Chinese women’s tennis star who is missing.

This unsettled Kyrgios and he demanded that a fan be removed from the crowd for distracting him in his serve.

“It’s the woman who looks as if she’s had 700 drinks, bro” he complained to umpire Renaud Lichtenstein.

But the damage was done.

Kyrgios was broken from 40-0 up in the ninth game, as he started swearing loudly at his team in the player’s box.

Djokovic, with only two unforced errors, happily pounced for a two sets-to-one lead.

However, Kyrgios did not fold easily in the fourth.

Both players held serve throughout the set and Djokovic ultimately prevailed in a tiebreak, 7-3.

“It always has been and always will be the most special tournament in my heart,” Djokovic said.

The Serbian star won his first Wimbledon crown in 2011.

He outlasted Roger Federer in an epic five-set match in 2019.

In 2021, he ousted Italian Matteo Berrettini to bag his 6th title.

Djokovic, whose status for the US Open is unclear due to his refusal to be vaccinated for COVID-19, was in danger of not winning a Grand Slam title during a calendar year.

He was not allowed to play in the Australian Open and was deported from the country due to his unvaccinated status.

We congratulate the Serb on his historic triumph!