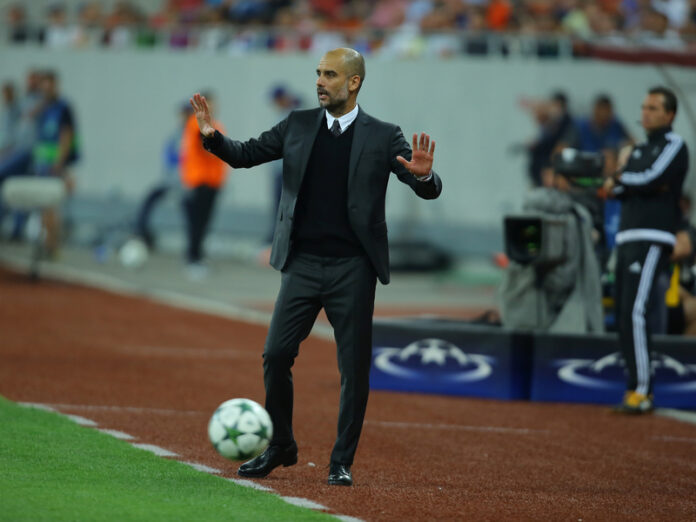 Manchester City fans have officially responded to manager Pep Guardiola’s comments following the Citizen’s 6-3 home win to RB Leipzig on Wednesday and have asked him to ‘’stick to coaching.’’

City started their Champions League campaign in an emphatic style, but the sight of thousands of empty seats inside the Etihad Stadium had somewhat marred the significance of the win.

Christopher Nkunku took home the match ball, but his hat-trick could not save the visitors from suffering a heavy defeat.

City, who had reached the Champions League final last season, will take on Southampton in the Premier League this weekend and Guardiola hopes for more fan support in the stands for that match.

“I would say the last three games we played here we scored 16 goals,” Guardiola told BT Sport. “So I would like to come more people next game on Saturday, we need the people next Saturday. Please.

“We will be tired. I know the team from Ralph [Hasenhuttl, Southampton manager] is quite similar to the way they play. They are so, so dangerous with good quality and it’s a really important game for us.

“So I invite to all our people to come next Saturday, 3pm, to watch the game.”

But, Manchester City fans did not welcome the plea made by Guardiola.

Kevin Parker, general secretary of Manchester City Supporter’s Club, feels Guardiola is not seeing the bigger picture and being unfair in criticizing fans for not willingly attending the matches.

“[What he said] did surprise me,” Parker said. “I’m not sure what that’s got to do with him. He doesn’t understand the difficulties that some people might have getting to a game at the Etihad on a Wednesday evening at 8pm.

“They’ve got kids to think of, they might not be able to afford it, [and] there are still some Covid issues about. I don’t see why he comments on it.

“He’s absolutely the best coach in the world but, in the nicest possible way, I think maybe he should stick to that.“

“It just takes the edge off what was a good night. People are talking more about Pep’s comments than a fantastic game. To question the support, which is effectively what he is doing, is disappointing and uncalled for.”

Manchester City will expect a much higher crowd on Saturday, however, with 53,500 tickets out of the available 55,000 have already been sold.

The fan base also harbours a sense of bitterness towards the UEFA feeling the organisation has often treated Manchester City harshly.

They refer to the two year ban UEFA had imposed on City for FFP breach and the insignificant fine it had charged on Porto fans in 2011 for racially abusing Mario Balotelli.