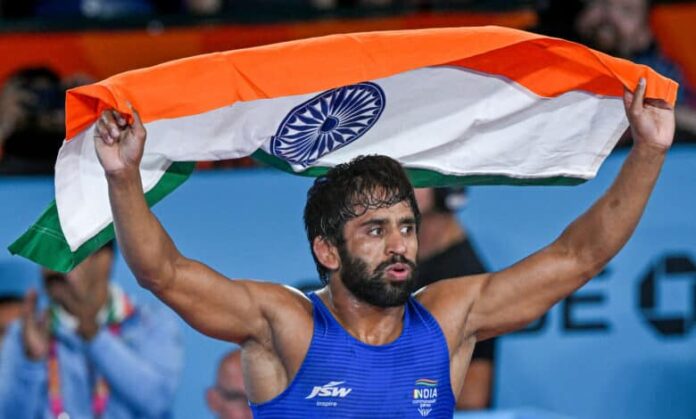 Bajrang now has four medals at the Worlds [a silver and three bronze] but this medal will surely be special as Bajrang fought the entire tournament with a bandaged head after suffering a cut on his head in the opening bout on Saturday.

Bajrang Punia won the bronze medal at the World Wrestling Championships 2022 by defeating Sebastian C Rivera of Puerto Rico 11-9. However, things were not looking good at the start with the Puerto Rican taking a 6-0 lead before Bajrang made a huge comeback to win the bout.

Bajrang, who lost to John Michael Diakomihalis of the U.S. in the quarterfinals, qualified for the bronze medal contest through the repechage round where he defeated Vazgen Tevanyan of Armenia 7-6 by points.

Rivera, a silver medallist at the 2022 Pan American Championships, targetted Bajrang’s right leg and executed an ankle pick to take an 8-6 lead at the interval.

After the interval, Bajrang looked more relaxed and was able to counter his opponent’s moves. He came up with a takedown to reduce the deficit and followed it up with another one to snap up a 10-9 lead.

The last 10 seconds were a nervy affair as Tevanyan worked his way to yet another takedown, but Bajrang held his position and stayed put on the mat to ensure he walked away with the win.

The Indian wrestler had earlier won bronze in 2013, silver in 2018, and bronze in 2019. Tokyo Olympics silver medallist Ravi Kumar Dahiya had crashed out early and failed to secure a podium finish.

It was a very successful year for the Indian star wrestler who won silver at the Asian Championships, defended his titles at the Commonwealth games and now managed to win 4 medals at the World Wrestling Championships.