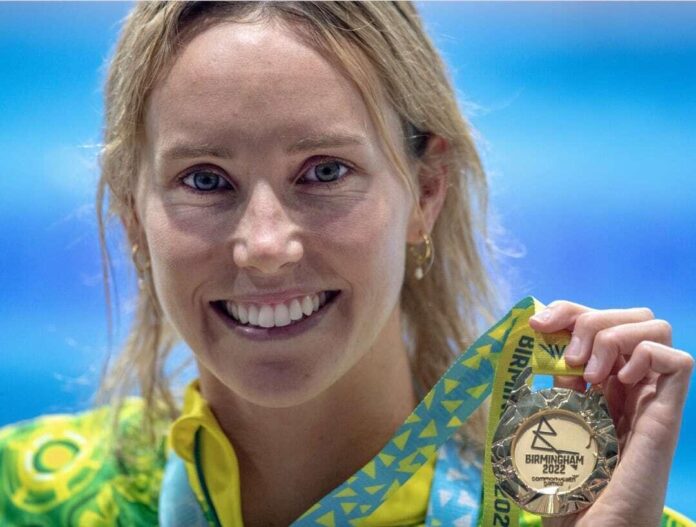 Emma has set a world record by winning more medals than a total of 56 nations participating at the 2022 CWG.

Australia continued its dominance at the top of the medal tally in CWG 2022 with 67 gold medals, 57 silver, and 54 bronze medals taking their overall tally to 178 medals.

The sheer dominance of all the Australian athletes was on display at CWG 2022
Australia swimmer Emma McKeon herself had a fantastic CWG 2022 event during which she also scripted a historic record.

The Australian swimming contingent has won a whopping 65 medals at the Commonwealth Games 2022 with 25 medals coming in gold and 20 each in silver and bronze.

The total of 25 gold was just three shies of the Australian swimming best-ever Games haul four years ago at Gold Coast.

Who is Emma Mckeon? For people that don’t know, let’s have look at all the other accomplishments below Emma has achieved in her illustrious career.

Emma is a four-time world record holder in the 4×100 meter freestyle relay.
She won a total of 11 Olympic medals after the 2020 Olympic Games, which made her Australia’s most decorated Olympian

With four gold and three bronze medals, she was the most decorated athlete across all sports at the 2020 Summer Olympics.

Emma is tied for the most medals won by a woman in a single Olympic Games.

She has won 17 medals, including four gold medals, at the World Aquatics Championship.

Emma has twelve medals, including eight gold, at the 2014 Glasgow and 2018 Gold Coast Commonwealth Games.

Haris Rauf is one of the most important members of Pakistan's pace attack for the T20 World Cup. He has been performing consistently for Pakistan...