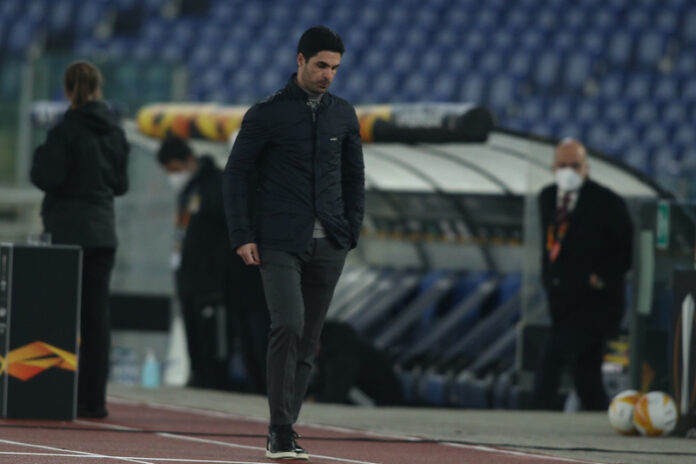 It was the first time in 18 months since the Emirates welcomed a match-day crowd.

But Arsenal fans can’t say they liked what they saw on the pitch on their return to their home ground.

The scenes were eerily similar to those at Brentford a week ago.

Even the vocal support of a red and white sea failed to save them from another dismal 2-0 defeat.

It would be harsh on Mikel Arteta if you specifically blame him for the Chelsea defeat.

The Gunners took on the defending European champions with a number of key absentees, including their new £50m center-back Ben White.

Therefore, Arteta can ask for some sympathy in this regard.

But, the air of malaise that you can sense around the Emirates today didn’t stem from a single defeat.

Too many games lost

The home defeat to Chelsea was Arsenal’s 20th loss under Arteta.

That means he has lost one-third of the matches in his managerial career. Not an impressive stat, by any means.

The sweet memories of beating Chelsea in the FA Cup final seem like a far distant memory these days.

Winning a trophy within a few months of his appointment earned the Spaniard huge credibility among the fans and the Arsenal hierarchy.

After a chaotic start to the 2020/21 season, Arsenal showed signs of resurgence in the second half of the season.

Even such a tremendous upturn in form could take them as far as 8th. This highlights how poor Arsenal had been on the first half of the campaign.

The biggest insult for Arteta was perhaps losing to his predecessor Unai Emery in the Europa League semifinal.

Emery, who was sacked mid-season because of Arsenal’s poor run of form, knocked out Arsenal with Villarreal.

Then, they went on to win the competition. Europa League elimination closed the door on European football for the Gunners.

Arteta cited the lack of pre-season preparation time and proper personnel for implementing his philosophy.

The owners decided to back him in the transfer window, and as of now, Arsenal have spent £129 million in the current summer window, which is more than all other clubs in England. However, their fortunes are yet to be changed.

Arteta has been drilling Arsenal to play out from the back since day one, but the team still feels uncomfortable in doing so.

The midfielders continuously struggle to play the ball into pockets of space so that the forwards can run into them.

Also, the persistence on trying to create more 1v1 situations throughout the pitch didn’t pay off yet.

It’s safe to assume that the Arsenal board won’t be as patient as they were last season if Arsenal goes on a similar run under Arteta again.

So, Arteta would be hoping for his star players to deliver once the fixture list takes a favourable turn.