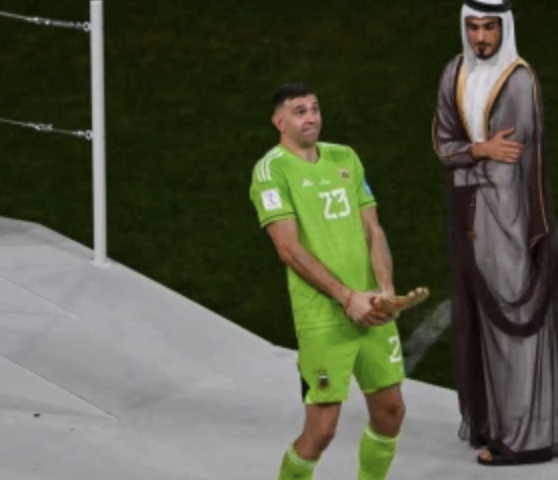 After another stunning penalty shootout performance, and a crucial save in extra time to deny France a winner, Emiliano Martinez was awarded the tournament’s Golden Glove award.

However, Martinez stunned the world by producing a lewd celebration when he was handed his award after the World Cup final.

After accepting the award on stage, the 30-year-old lowered the trophy to his groin and thrust it towards the crowd.

This was a repeat of his controversial celebration having picked up the same accolade at the Copa America last year.

The Argentina goalkeeper explained that his shocking trophy celebration was in response to France supporters booing him.

Explaining the gesture, he told Argentine radio station La Red, “I did it because the French booed me. Pride does not work with me.”

Argentina beat France on penalties in Doha after a classic contest finished 2-2 after 90 minutes and 3-3 after extra-time.

Martinez had moved a crucial save late in extra-time and then saved Kingsley Coman’s spot-kick to help his country to glory.

In one video shared on social media, Martinez was seen asking his team-mates for a ‘minute’s silence’ for Mbappe before the players start the dressing room celebrations.

The Paris Saint-Germain star scored a superb hat-trick, winning the competition’s Golden Boot with eight goals in the process, and converted his spot kick in the shoot-out.