Karisma Kapoor was one of Bollywood’s top heroines in the late 90s.

Few people know that Karisma was supposed to get married to Abhishek Bachchan.

But they had a break up and then, Karisma tied the knot with businessman Sunjay Kapur.

They have two children, daughter Samaira and son Kiaan.

However, The couple underwent an ugly divorce.

Their divorce saw both parties levelling nasty allegations against one another.

Karisma had also filed a dowry harassment case against Sunjay and his mother Rani.

Based on a report by a TV channel, Karisma was “auctioned” by Sunjay to one of his friends.

Apparently, Karisma had revealed that Sunjay tried to force her to sleep with his friends.

And when she refused, he beat her up and even put a price tag on her, to auction to one of his friends.

Karisma also alleged that Sanjay refused to follow up on his financial commitments.

Sunjay made a counter allegation that Karisma only married him for his money.

These are just rumours as nobody knows the real story.

Last week, Karisma Kapoor conducted a question and answer session with her fans on Instagram.

And one of the questions was – “Will you marry again?”

This made the fans get all excited!

She had shared a picture of the ceremony in which she is showing off the kaleeras like a trophy. 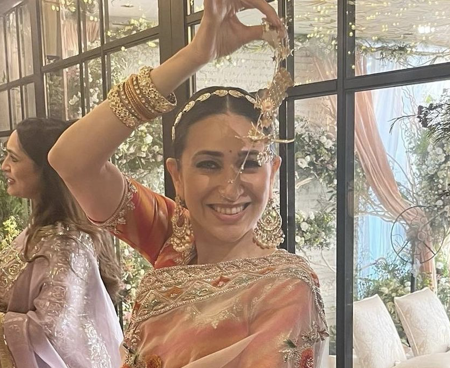 For those who don’t know, in Punjabi weddings when the bride’s kaleera falls on the unmarried sister or sister-in-law, she is the next one to get married.

Alongside the pictures, Karisma had written, “The Kaleera fell on me guys!”

Her friend, Ami Patel had instantly commented, “Lolo your next I told you.”

We hope that the talented actress finds happiness again.