Vicky Kaushal and Sidharth Malhotra spill the beans on the latest episode of Koffee with Karan season 7! 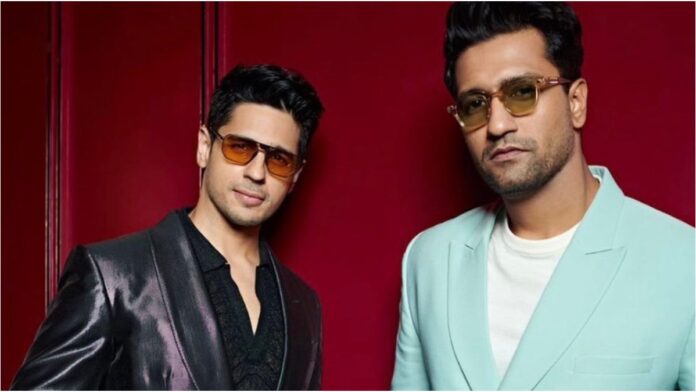 For the latest episode of Koffee with Karan, Sidharth Malhotra and Vicky Kaushal graced the infamous couch and all we can say is that these ‘Punjabi Mundas’ are on fire!

Vicky Kaushal and Sidharth Malhotra, both of whom are sort after talent in BTown were the latest guests on the show and the episode was just off the charts!

The actors dished about everything from the blissful married life of Vicky and Katrina to Sidharth Malhotra’s plans to marry rumored girlfriend Kiara Advani.

Both Vicky and Siddharth were quite outspoken and honest about their respective professional and personal lives which made the episode 10x more interesting!!

Ever since Katrina and Vicky got married, the Koffee couch is being coined as the manifestation couch and that is exactly what Siddharth said when asked by Karan.

Karan, as usual, tried to get all the details from him by asking “Now that you are dating Kiara Advani are there any future plans? Anything that we should know about.” to which Sidharth while referring to Vicky said, “Come on. See, he was so secretive. And I should start telling my plans? It’s all in my head.”

After grilling Sidharth, KJO turned his focus on Vicky and asked him if he ever imagined getting married to Katrina to which he blushingly said, “Whatever happened last season on this couch–it was really my moment to know that she knows about me. We had never met before that.” Vicky is obviously referring to the moment when Katrina said she would look good with him when asked by KJO.

He also revealed that they first met at Zoya Akhtar’s house after the show. They hadn’t met and spoken to each other before Katrina’s comment on Koffee With Karan.

Vicky Kaushal also acknowledged that he was well aware of all the memes that went viral on social media. He said, “We had a friends group and everyday, all these memes and funny tweets and funny messages would get shared and we would laugh about it. We used to have a blast.”

From a professional point of view, Vicky Kaushal is gearing up for The Immortal Ashwatthama, Luka Chuppi 2 and Takht all stated to release this year.

Sidharth on the other hand, has Thank God and Yoddha lined up also stated to release this year.

Looks like the boys had a lot of fun in the episode and we are delighted because that made the episode so much better for us the audience.

Here’s hoping Sidharth gets what he manifests for and has a good fortune like Vicky and Katrina.