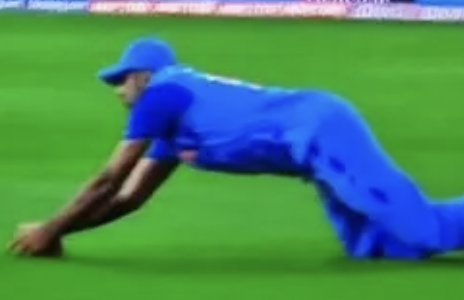 A Twitter war has broken out between Indian and Pakistani cricket fans after the high octane clash between the two nations on October 23.

Indian off-spinner Ravichandran Ashwin was at the centre of the controversy.

The comments started flowing in after the spinner claimed a catch of Shan Masood in the 8th over of the Pakistan innings.

The incident took place in the third delivery of the over bowled by Shami.

Masood tried to pull the short ball towards the fine leg region where Ashwin was stationed.

The ball went in the air and landed right in front of Ashwin who dived and completed, what looked like a brilliant catch.

The spinner too felt the same and claimed the catch.

The umpires concurred and gave it out before referring it to the TV umpires.

The replays confirmed that the ball had hit the turf before Ashwin caught it.

This incident enraged many Pakistani fans who started trolling Ashwin, comparing it to his ‘mankad’ dismissal against Jos Buttler during the Indian Premier League.

However, many Indian fans defended Ashwin.

One Indian fan wrote – Anyone who has ever played professional cricket knows that knowing if the catch was clean in just a fraction of second is impossible for the fielder in such situations.

Anyway, Ashwin had the last laugh by hitting the winning runs, giving India a famous victory.