Kohli underlines his greatness as India down Pakistan 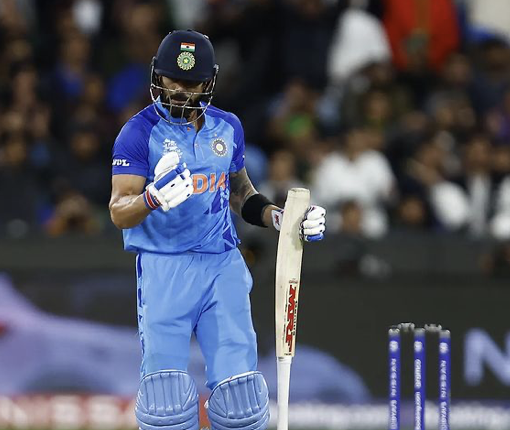 Virat Kohli snatched the victory from the jaws of Pakistan with his sensational knock.

India was struggling at 31-4 and Pakistani pacers were on top but Virat Kohli and Hardik Pandya brought India back into the game with their brilliant 113-run partnership.

India won the toss and elected to field first on a pitch that was offering good swing to the pacers.

Indian bowlers made full use of the swing and dismissed both Babar and Rizwan within the first 4 overs.

Shan Masood and Iftikhar Ahmad rebuild the innings and added 76 runs for the third wicket.

Iftikhar Ahmed scored an exceptional half-century off just 32 balls before getting LBW in Shami’s over.

Pakistan lost some quick wickets after Iftikhar’s dismissal but Shan Masood (52 off 42) stood calm on the other end and helped his side reach a fighting total of 159 runs.

India scored just 31 runs and lost their three main batters within the powerplay.

Axar Patel was promoted up the order but he got run-out on just 2 runs.

India was struggling at 45-4 in the first 10 overs and the required run rate was over 12 but Virat Kohli and Hardik Pandya added a match-winning partnership for the 5th wicket.

Both of them kept scoring runs and kept India alive in the match. 48 runs were required off the last 3 overs and it was looking like to mountain to climb.

Virat Kohli then showed his aggressive side and hit 17 and 15 runs in the next two overs against Shaheen and Haris respectively.

The last over drama

16 was needed off the last over and Hardik got out on the very first ball. But Virat stayed calm in the dramatic last over against Nawaz.

On the 4th ball of the over, Virat smashed a six off a no-ball and then ran 3 on the free hit to make the equation 2 off 2.

Nawaz created more drama by dismissing Dinesh Karthik but a wide on the next ball spoiled things for Pakistan.

Just a single was required off the last ball and Ashwin hit the ball over mid-on to get India over the line.

Pakistan will still be thinking about how they managed to lose this match after such a wonderful start with the ball.

This exceptional knock will be remembered for ages as the most iconic knock of Virat Kohli in T20 Internationals.