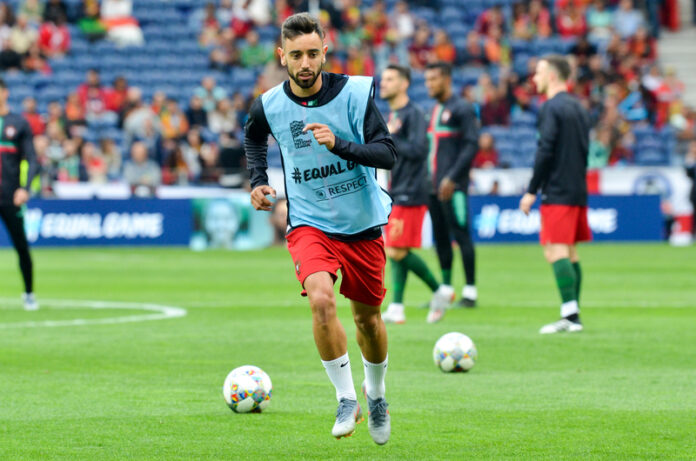 The prodigal son has returned to Manchester! 12 years after leaving Old Trafford.

Cristiano Ronaldo has returned to the club that brought him international stardom.

Despite being 36 years old, Ronaldo didn’t join the Red Devils for making up numbers.

He comes off a 36-goal season at Juventus and also bagged the Euro 2020 Golden Boot with 5 goals in 4 matches for Portugal.

But, what does this transfer mean for their other Portuguese talisman – Bruno Fernandes?

Since his midseason arrival at the club in 2020, Fernandes has been excellent for the Mancunians.

He hit 43 goals and assisted 25 more in only 82 appearances.

The former Sporting Lisbon midfielder was instrumental in securing Champions League qualification for the Reds.

He has been central to the substantial progress Man United have made under Solskjaer over the last one and a half seasons.

But will he have the same lethal edge with Ronaldo back into the fold?

Will Bruno combine well with Ronaldo?

Fernandes’s national team numbers could give us an insight.

Bruno Fernandes has earned 33 caps for his national team so far, but he has managed to score only 4 goals in them.

Without taking a deeper look, the stark contrast between Fernandes’s club and national team record implies that Bruno Fernandes is not as effective for his country as he is for his club.

Is that actually the case?

In the recently concluded European Championships, Fernandes was one of the biggest disappointments of the competition.

He started the first two matches as a number 10 in a 4-2-3-1 formation, but he failed to have a meaningful impact in both games.

For the third match, Portugal boss Fernando Santos chose to keep him out of the eleven as Portugal shuffled to a 4-3-3.

At Manchester United and Sporting, Bruno Fernandes played his best football as a pseudo-striker.

He starts high up the pitch, but often you would find him dropping deep to collect the ball, play an in-field pass, and receive it back inside the d-box to launch a goal attempt.

Ronaldo would make this problematic in theory since he likes to drop deep as well and play the link-up role between the midfield and forwards.

He would occupy the spaces that Fernandes loves to target.

Not to mention, Ronaldo might take over the penalty duties as well. So, we don’t expect Fernandes to be as prolific as he has been till now at United.

However, this doesn’t necessarily mean that Fernandes will not be an important part of the United setup anymore.

He might be scoring fewer goals, but he can still be the creative engine to feed the exhilarating United frontline.

Since United has better runners in the forms of Jadon Sancho, Mason Greenwood, and Marcus Rashford, Fernandes can play behind-the-line balls for dangerously exposing the opposition defense.

A switch to a 4-4-2 or a 4-3-3 might be uncomfortable for Fernandes since these systems don’t require a defined playmaker.

In such scenarios, Fernandes will have to fall deeper into the midfield and take upon more defensive burden.

So, we would have to wait and see how Ole Gunnar Solskjaer plans on pairing up his Portuguese stars.