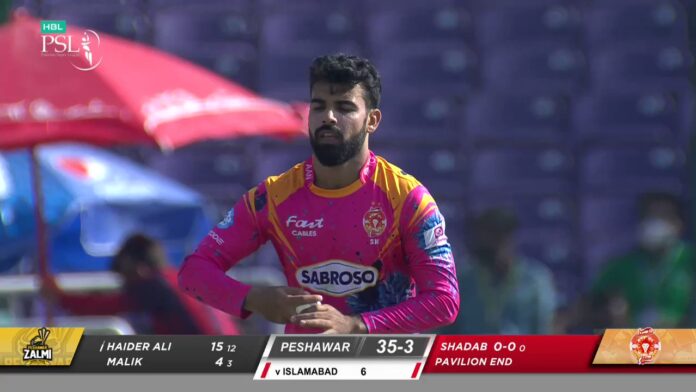 A brilliant opening stand between Alex Hales and Paul Stirling helped Islamabad United to register a convincing 9 wicket victory against Peshawar Zalmi in their opening match.

Rutherford smashed 70 runs to lift his side from 35-4 to a fighting 168-6 but that went in vain due to the destructive batting from the United openers.

Peshawar Zalmi lost 4 wickets in the first 37 balls of the match but Sherfane Rutherford played an outstanding knock to rescue his side.

He shared some crucial partnerships with Shoaib Malik and Ben Cutting to set a fighting total of 168 runs on the board.

But the Islamabad openers had some other ideas as they smashed a superb opening partnership of 112 runs in less than 10 overs.

An epic start from United bowlers

Peshawar had a very bad start to their innings as they lost their first 3 wickets within the powerplay and the fourth one fell on the first ball of the 7th over.

Faheem Ashraf picked up 2  while Hasan and Shadab picked up 1 wicket each out of those 4 wickets.

Hasan Ali bowled out Tom Kohler-Cadmore for a duck on only the 3rd ball of the match.

Faheem Ashraf then dismissed Yasir Khan and Hussain Talat in his back-to-back overs.

Peshawar was 3 down on 35 runs at the end of the powerplay but on the very first ball of the 7th over the United skipper, Shadab Khan clean bowled Haider Ali who scored only 15 runs.

The hard-hitting West Indian all-rounder, Sherfane Rutherford played an incredible knock to rescue his side from 35-4 to 168-6.

He smashed 7 fours and 3 sixes in his knock.

He shared 2 fifty-plus partnerships in this innings, first with Shoaib Malik and then with Ben Cutting.

In the chase, Hales and Stirling looked lethal in the start, especially Paul Stirling who also made a few records today.

Stirling thrashed the 3rd fastest half-century of PSL history to help his side from contributing in the total.

Stirling scored 57 runs off just 25 balls including 7 fours and 3 sixes before getting run-out.

His partner Alex Hales continued his incredible knock and scored runs against the Zalmi bowlers.

Hales smashed a boundary on every 4th ball that he faced today.

Hales reminded unbeaten on 82 runs off just 54 balls including 13 fours and a six.

After the dismissal of the first wicket, the young Rahmanullah Gurbaz joined Hales and added some quick runs before getting passed over the victory line.

Gurbaz scored an unbeaten knock 27 runs off 16 balls to register a 9 wicket victory against Peshawar Zalmi.

Maryna Moroz has made history by becoming the first UFC star to sign a deal with men's lifestyle magazine Playboy Moroz has been fighting in...

The Jamaica Tallawahs will head to Qualifier 2 of the Hero Caribbean Premier League (CPL) following a dominating win against Saint Lucia Kings in...