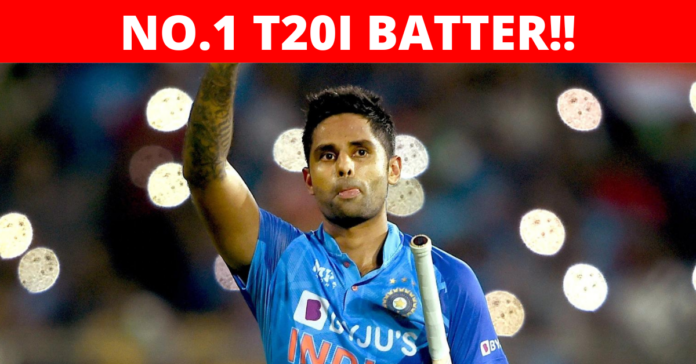 Suryakumar Yadav is the new No.1 T20I batter

Surya Kumar Yadav aka SKY has dethroned Pakistan’s Mohammed Rizwan to become the new No.1 T20I batter. Suryakumar has been in incredible form in this year’s T20 World Cup having scored two half-centuries in three outings.

Surya is also the leading run-getter in this year’s T20I cricket having scored a total of 935 runs and his innings have come at a crucial time. His innings of 68 runs off 40 balls came in a pressure situation when the other Indian batsman struggled. He has now become the 23rd player overall to top the ICC T20I rankings for batters and only the second Indian to claim the summit position. The only other Indian batsman to hold the No.1 position is Virat Kohli

“Yadav’s 51 not out off 25 balls against the Netherlands in Sydney and a valiant 68 off 40 against South Africa in Perth have helped him overtake New Zealand’s Devon Conway and Pakistan’s Mohammad Rizwan, who had held the top spot since 4 September this year,” ICC said in a release

New Zealand batter Glenn Phillips also moved up in the rankings, scaling his career-best seventh position after scores of 104 against Sri Lanka and 62 against England. South Africa batter Rilee Rossouw also entered the top 10, courtesy of his 109 against Bangladesh. He moved up 17 slots to a career-best eighth position.

Riley Rossouw breaks into the Top 10

Rilee Rossouw also broke into the top ten. Rossouw’s century against Bangladesh saw him jump 17 places to be placed in eighth while Phillips’ ton against Sri Lanka took him up five places to sit at seventh.

Wanindu Hasaranga has reduced the gap with top-ranked Rashid Khan. Hasaranga is the leading wicket-taker in this edition of the T20 World Cup. Sam Curran and Anrich Nortje were the other bowlers moving up in the top ten.