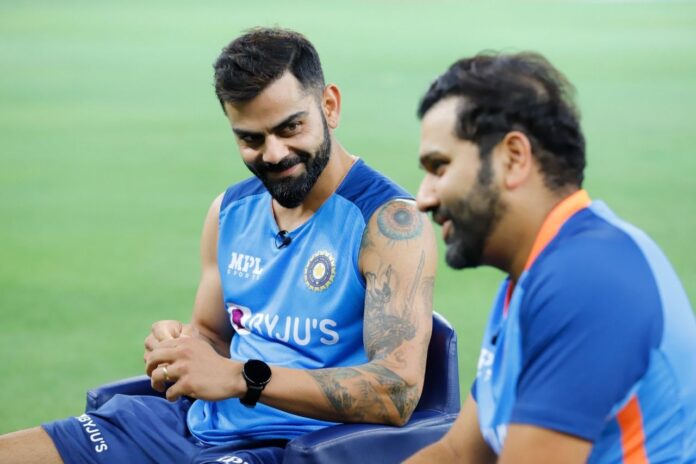 Rohit Sharma interviewed Virat Kohli after his stunning century against Afghanistan in the Asia Cup.

“Itni shuddh Hindi bola raha hai mere saath pehli baar (For the first time he is talking to me in pure Hindi),” Kohli looked at the camera and said.

“I’d spoken to Rahul [Dravid] bhai three-four days back, where batting first, especially the middle overs phase, how I can improve my strike rate. My only goal was to work on whatever I need to improve, I will try it at the Asia Cup. I honestly didn’t expect it [to score a T20I century], was shocked, [and] as you also mentioned after that, no one expected a century from me in this format after a long time, was pleasantly surprised, grateful and honest.” Kohli added

Kohli explained how his focus is on playing good cricket shots, without worrying too much about strike rates and six-hitting, something he said had bothered him prior to his break. He admitted to having been “desperate to do something that wasn’t in my game” at that point.
“My aim was to always to play all three formats, and I banked on good cricketing shots,” he said. “I always came to every tournament or series thinking six-hitting is not a big strength of mine. I can [hit sixes] when situation demands, but I’m better at finding gaps and hitting boundaries, so as long as I can hit boundaries, it will still serve the purpose for the team.
“I told the coaches as well that I’m going to try and hit gaps rather than thinking I’ve to hit sixes to improve strike rates in T20 cricket. That thing I removed from my system in this tournament, and that helped because I was able to come back to my template. But it’s about being in a good space and enjoying your batting.

Virat Kohli says that the team would be absolutely ready for the T20 World Cup.

He added, “I see the next couple of months as a great phase where we face quality teams, go to Australia and have preparation time and I’ve no doubt that we will be ready come the first game of the World Cup,” he added

“We can play in many ways, but my role is to play as per the situation and if it demands I have to take the scoring rate higher, should be able to do it. My aim was if I can be in this zone, can be relaxed because know if I’m set for 10-15 balls, I can accelerate. I’m very happy that especially from the team’s point of view, I’m back to being in my template I’ve played for a while, which was going away from because I was desperate to do something that wasn’t my game.” Kohli said

Virat Kohli’s 71st hundred also puts him alongside the great Ricky Ponting in the list of most centuries. Sachin Tendulkar is still way ahead with 100 international tons.