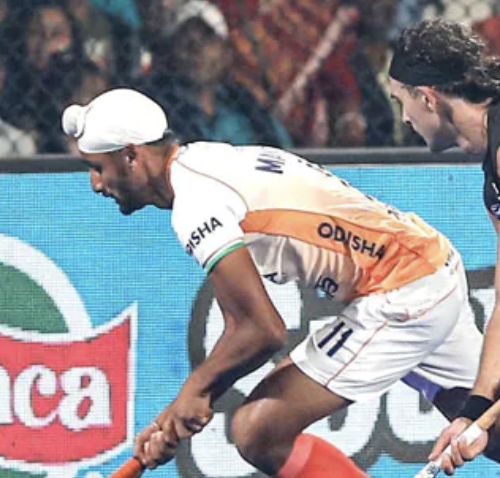 India’s journey in the FIH Men’s Hockey World Cup came to an end on Sunday as they lost 4-5 to New Zealand in a sudden death shootout at the Kalinga Stadium.

The defeat left thousands of fans disappointed as India had been leading 3-1 at one stage but failed to capitalize on their opportunities, allowing New Zealand to level the match 3-3 at the end of regulation time.

India had earned as many as 11 penalty corners in the game, but converted only two of them into goals, which ultimately proved to be the difference in the match.

Despite the heroics of seasoned goalkeeper PR Sreejesh, who pulled off a couple of brilliant saves, India were unable to secure victory in the shootout.

It was a fast-paced match initially dominated by the Indians, who went ahead by two goals much to the delight of the home crowd.

The fifth-ranked India struck again in the third quarter with Varun scoring in the 40th minute for his team.

Leading 3-1, the hosts perhaps lost a bit of focus and that led to New Zealand’s stunning comeback. First, Russell converted a penalty corner for his team in the 43rd minute to make 2-3and then Findlay struck the equaliser, again from a penalty corner, to silence the home crowd. .

In the penalty shootout, both the India goalkeepers, Sreejesh and Krishan Pathak, showed great skills, saving four goals out of nine strikes.

Sreejesh sustained an injury during the shootout and was replaced by Pathak. However, the Indians succumbed to pressure and seniors failed to shine on the big stage. Shamsher, Sukhjeet, captain Harmanpreet Singh and Abhisek all faltered in the shootout.

He said that the team will have to work on converting more of their opportunities in the future if they wish to be successful in major tournaments.

In the other crossover match of the day, Spain beat Malaysia 4-3, also in a penalty shootout, to qualify for the quarterfinals after the two sides were locked 2-2 in regulation time.

It was a tough day for fans of both India and Malaysia as both teams were eliminated from the tournament in similar fashion.