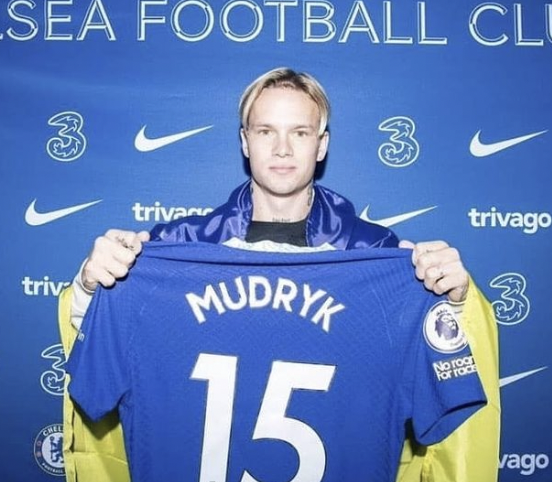 The sports world was recently abuzz with the news of a major transfer deal, as Chelsea Football Club announced the acquisition of talented Ukrainian winger Mykhailo Mudryk from Shakhtar Donetsk.

The 22-year-old player, known to his friends as “Misha,” has signed an eight-and-a-half-year contract with the London-based team, and the transfer is said to be worth an impressive £88.5m.

Mudryk had previously expressed his desire to play for Premier League leaders Arsenal, and had even hinted at this in a series of social media posts.

However, Chelsea ultimately won out in the race for his signature, agreeing to a deal with Shakhtar on a Saturday night and allowing the player to travel to London to complete a medical and sign his contract.

While Mudryk may be a relatively unknown quantity to many fans in the English league, he is already making a name for himself as one of the most promising wingers in Europe.

He has a wealth of experience playing at a high level, having made 65 senior club appearances in his career, the majority of which have come in Ukrainian competition.

However, he has also played in the Champions League and has thrived at that highest level of club football. In the group stage this season alone, he scored three goals and registered two assists, impressing audiences with his scorching pace and incredible skill on the ball.

What kind of person is he?

Mudryk is also a deeply religious individual, as evidenced by the array of tattoos on his body, which include phrases like “Only Jesus” and “Dear God, if today I lose my hope, please remind me that your plans are better than my dreams…”

These tattoos are a reflection of the player’s strong faith, which has no doubt helped him to stay focused and motivated during his career.

Mudryk is also a deeply personal person, as can be seen from the tattoo he has recently added beneath his right ear, of a blue butterfly, which he got inspired by the book “Papillon” written by Henri Charriere.

He said it symbolizes “determination and persistence”, which have been especially relevant in recent weeks, when Mudryk has done little to hide his determination to move to England.

Growing up in Ukraine, Mudryk always stood out as a talented player with a natural skill on the ball.

After only a few games for Shakhtar’s first team, he was already being dubbed the “Ukrainian Neymar,” a nickname that he wears with pride. Neymar was his favorite player growing up, and he has always looked up to him as a role model.

The arrival of Roberto De Zerbi as Shakhtar’s head coach in May 2021 led to a rapid acceleration in Mudryk’s development.

De Zerbi took the young player under his wing and made him a personal project of sorts, determined to help him reach his full potential. He even went so far as to say that it would be a “defeat” for him if Mudryk did not reach a “high level.”

De Zerbi’s belief in Mudryk’s potential is not unique – the club’s director of football, Darijo Srna, has also spoken highly of the young player, saying “Mudryk is a serious talent. After Kylian Mbappe and Vinicius Junior, he is the best player in Europe in his position.”

Mudryk’s transfer to Chelsea is a dream come true for him, and he says he is thrilled to be joining such a prestigious club.

Away from the pitch, Mudryk has long been preparing for this moment by studying English and working hard to improve his language skills.

As long ago as 2016, at the age of 15, he was already posting on social media in English, with messages like “Boy with big dreams” and “Dreams come true if you work on them.”

All of this hard work and dedication has led Mudryk to this next chapter of his life, and he is ready to take the English league by storm.

With his incredible pace, skill, and determination, he is sure to be a valuable asset for Chelsea and a player to watch in the coming years.

He is also known for his humility and sportsmanship, and will no doubt be a positive influence on and off the field for the team.

The Chelsea fans are excited to see him in action, and they are expecting big things from Mudryk as the team looks to make a push for the top of the league.

With his incredible talent and work ethic, there is no doubt that he has the potential to become one of the best players in the league, and maybe even in the world.