#BoycottBollywood: Who is it affecting really? 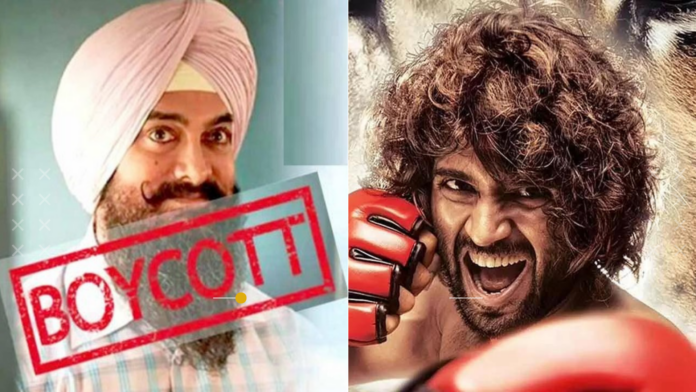 So the #BoycottBollywood wave is rising

The one big film that fell victim to this was Amir Khan and Kareena Kapoor starrer, Laal Singh Chaddha.

Then there was Vijay Devarakonda and Ananya Pandey starrer, Liger.

While no one knows who starts this trend and with what intentions, often it can be traced back to a random post on Twitter.

The Film Fraternity have spoken against this citing they have worked on their films and hope that audience comes to the theater to watch them.

On the other side, the advocates of the #BoycottBollywood movement ask for complete audience withdrawal from the theaters to ensure the commercial failures of these movies at the box office.

While there are speculations that it is a publicity stunt or politically driven movement, the fact remains that the audience has refrained from going to the theaters.

While there has been an open protest against Bollywood online, on many occasions it has triggered violent protests offline as well.

The Bollywood boycott culture is not limited to theater viewing.

Even OTT platforms have fallen victim to it.

When Amazon Prime came out with its web series Tandav in 2021, it too had to face the wrath of the protesters.

And Amazon Prime is not the only OTT to suffer. Many others have faced a similar situation.

But the big question is who is suffering really?

On one side, there are the Protesters – the advocates of #BoycottBollywood. On the other side, there’s the film fraternity.

While both are trying to sway the audience to their side, by their pleas and preachings, in the end, it’s the audience that casts the deciding vote.

So clearly, the audience is the catalyst that makes or breaks the movement.

Now the only issue with the audience is that the audience never starts the movement on its own. It either supports or skips it.

And that’s the sad part. If it’s the audience or the masses that can decide the fate of the Film Industry the decisions should be theirs to make. They shouldn’t be tricked or triggered into making a decision.

Now, the film fraternity has been wrong too when it started assuming that anything they churn up can be served to the audience.

Over the years, Bollywood and many other emerging Regional Film Industries have begun using PR and audience manipulation tactics to sell below-average content.

Naturally, the audience has felt cheated by their favorite filmmakers and stars.

On the other hand, some are instigating the audience to serve their agenda, which has nothing to do with the cause being promoted.

They also have used mass-manipulation tactics to give well-crafted stories and doctored facts to turn the audience against a particular movie or star.

So, the audience is being played from both sides. Neither the protesters nor the film fraternity can do anything without the audience.

Also, neither the Film Fraternity nor the protesters have anything worthwhile to lose.

The Film Fraternity can easily sell its content globally and recover its investment. The protesters can easily find another agenda for the campaign.

The only true victim here is the audience that will be deprived of some genuine content. While the wrath is against a particular fraction within the industry, it also affects genuine filmmakers and stars.

But most importantly it deprives the audience of watching good content.

And if that is the case, then instead of playing the audience for a fool, they should respect the audience.

And as far as the audience is concerned, they care about one thing when it comes to films and entertainment. Good Content.

The only way the audience can make a decision is when it is driven by their instincts.

Not all those who trigger the movement have been on a life mission on one agenda. They are not protesting against a particular cause.

They cause changes with the campaign they are supporting. Today it is anti-Bollywood, tomorrow it could be something else entirely.

Imagine if the Film Fraternity decided that it’s not worthwhile to make films in India. With their wealth and resources, today can make foreign languages films and cater to global audiences.

That means an entire Indian film industry could shut down, making millions of honest workers jobless.

We question talents who have left India and settled abroad working for foreign nations. We even question their patriotism.

But this is not just the story of India. Even in countries like China, stars have migrated to different countries and taken citizenship there.

The point is we are being parties to protest and creating a state of unrest in the country. Wouldn’t it force anyone to move away from the country?

Wouldn’t we do the same, if our surrounding becomes a threat to our survival? Why don’t we pause to think about what kind of environment are we creating around us?

One that fights over trivials or one that strives to build a nation. Instead, why not be a party to progress and support what helps the nation and serves its people?

The Bollywood Boycott movement against movies simply suggests that we have nothing important to focus on.

This is an Entertainment industry. Their purpose is to entertain us.

If we see it just that, then how could this industry be a colossal threat to the nation?  And if they are not that powerful, then why fight them?

Can’t we just watch what we like and ignore what we don’t?

For the masses that want to tune out from their day’s hardships by putting their stress aside for a bit and relaxing, it is a good option.

For those hundreds of crew that work on a film without any scope of recognition, it is their livelihood.

So, next time, we choose to come together for a movement, let it be for a worthwhile cause. Not because we found a random post online or a random forward on Whatsapp.