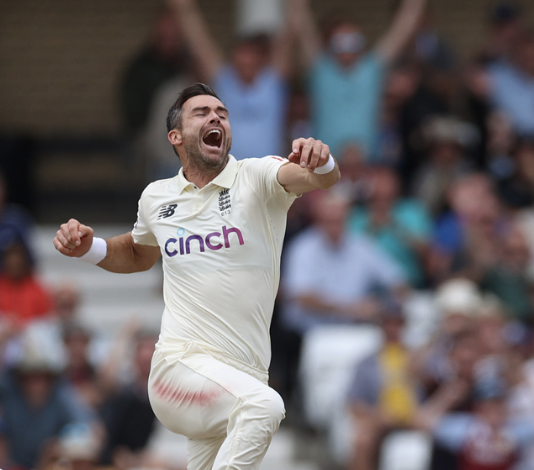 England started the day with their backs to the wall.

However, it was the veteran English pacer Jimmy Anderson who sparked off a remarkable fightback an astounding exhibition of seam and swing.

After being bowled out for 183, England needed early wickets.

Sharma was cautious, unlike his natural self but gave notice of his intent by playing a lovely off-drive and a flick-pull for the only two boundaries in the first 11 overs, which yielded just 12 runs.

Robinson gave England the first breakthrough when he dismissed Rohit Sharma on the stroke of lunch.

Rohit made a valuable 36 but more importantly, put on 97 for the first wicket.

KL Rahul supported him beautifully and marked his Test comeback with a fine half-century.

Rahul finished the day unbeaten on 57, having added 48 runs to his overnight score of 9.

Post lunch, both Anderson and Robinson found more purchase from the conditions.

Pujara even survived an lbw decision when padding up but won a review on height.

Anderson bowled a brilliant spell in the second session that saw him dismiss the two big guns of India’s middle-order – Cheteshwar Pujara and Virat Kohli, in successive deliveries.

With Kohli’s wicket, Anderson drew level with Anil Kumble as the third-highest wicket-taker in Tests.

Both the bowlers have 619 wickets.

After Anderson’s double-strike, Ajinkya Rahane was also soon to fall as he was run-out after a mix-up.

Rahane looked nervous and was looking to run every time the ball touched the bat.

When he ran himself out for five, India were 112 for 4

Rishabh Pant joined Rahul at the crease and the two moved the scoreboard on to 125/4 before bad light stopped play.

It then began to rain, and only three more deliveries were bowled before it was decided to abandon play.