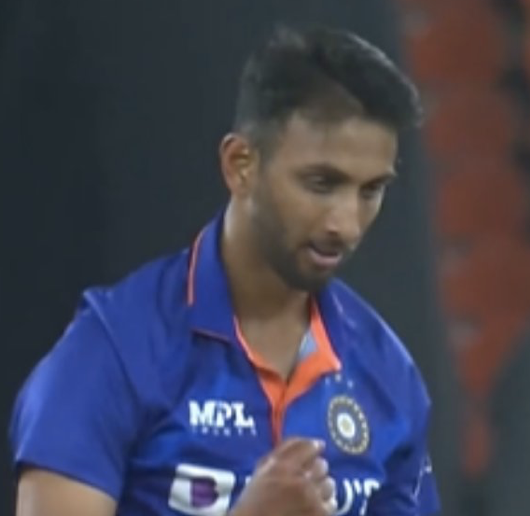 Prasidh Krishna sparkled with the ball by picking up a superb four-wicket haul that allowed India to defend their total of 237 runs.

Earlier, the crucial knocks from Suryakumar Yadav and KL Rahul helped their side to put a fighting and respectable total on the board after that little collapse from the Indian top-order.

India took an unassailable 2-0 lead in the series under the leadership of their new skipper Rohit Sharma.

India registered yet another series victory against West Indies in the ODIs.

This was the 11th series win by India over West Indies in One Day Internationals which is the joint-most series win by any team against any other team.

Prasidh Krishna leads the Indian side towards victory with his match-winning spell of 4-12.

West Indies also bowled well to restrict India to just 237-9 despite some brilliant batting from Suryakumar Yadav and KL Rahul.

India experimented by sending Rishabh Pant alongside Rohit Sharma to open the innings but that didn’t work as the skipper Rohit Sharma edged the ball into the keeper’s hand on the last ball of the 3rd over.

Pant also had a short stay as he got caught out in Holder’s over after scoring only 18 runs.

The poor run and wait for the 71st International hundred continues as Virat Kohli departed cheaply.

The former skipper while trying to drive the ball, nicked the ball towards the keeper and got caught behind out on 18 runs.

India was struggling badly on 43-3 but KL Rahul and Suryakumar Yadav rescued team India from a big collapse.

Both of them played sensible cricket in their excellent 91 runs stand for the fourth wicket.

KL Rahul fell just 1 run short of a well-deserved half-century as he was given run-out on 49 runs.

Suryakumar Yadav completed his half-century but after scoring an important 64 runs, he got a top edge while trying to sweep the ball and Alzarri Joseph took an easy catch at short fine leg.

Washington Sundar and Deepak Hooda played some crucial cameos of 20 plus run to add more runs to the total.

Alzarri Joseph and Odean Smith picked up 2 wickets each.

In reply, West Indies started well in the first 7 overs as both openers played sensibly and scored 32 runs without losing any wicket.

Prasidh Krishna came in to give his side the first breakthrough by dismissing Brendon King on just 18 runs.

In his very next over Krishna also dismissed the experienced Darren Bravo for just 1 run.

The collapse continued and West Indies lost their first 5 wickets on just 76 runs but some small contributions from the lower order gave a little bit of hope to the West Indian side.

West Indies were all-out on just 193 runs thanks to the brilliant bowling performance from Prasidh Krishna who claimed a magnificent 4 wicket haul.

Prasidh proved with his performance that’s why he was picked over Deepak Chahar in this match.

His bowling figures of 4-12 are also the 3rd cheapest 4-wicket haul by any Indian bowler in an ODI game.