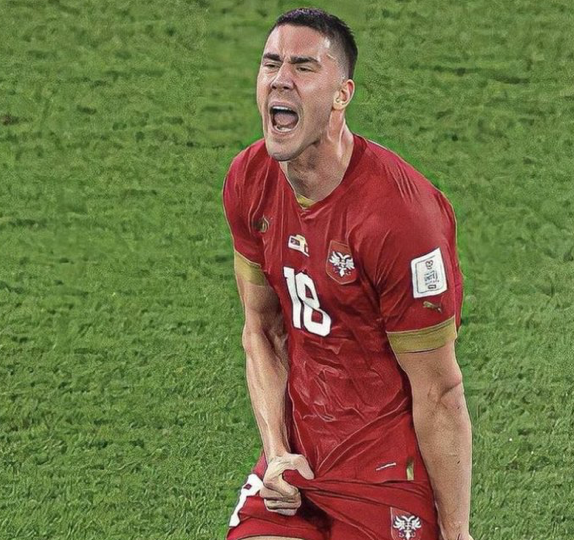 In Serbia’s crucial match against Switzerland, Vlahovic scored celebrated his goal by grabbing his private parts.

The striker’s goal made it 2-1 at the time and many fans were wondering about the reason for this weird celebration.

Well, here is the scoop!

Recently Serbian media outlets reported that Vlahovic was having an affair with a team-mate’s wife.

They reported that Vlahovic’s lack of minutes was because he had been caught in an affair with the wife of national reserve goalkeeper Predrag Rajkovic.

The woman in question, Ana Cakic also took to social media to dismiss the claims.

Cakic has long been in a relationship with Serbia and Mallorca goalkeeper Predrag Rajkovic and in August 2018, they got married. Together they have two children.

This “affair” was supposedly the reason the Juve star wasn’t in the starting line-up in Serbia’s first two World Cup matches, despite being one of their biggest stars.

However, the 22-year-old denied the claims and called the rumours ‘absurd’ in a recent press conference.

Vlahovic said, “What we all read and hear about, there’s no need to comment on something so absurd.”

“Evidently, these people are bored and have nothing better to do because they are frustrated or angry, but working against the national interest of the team at the moment is obviously their main job right now.”

Vlahovic’s gesture of grabbing his balls was a symbolic way of pouring scorn on these rumours.

Well, it certainly ‘grabbed’ the attention of the world!