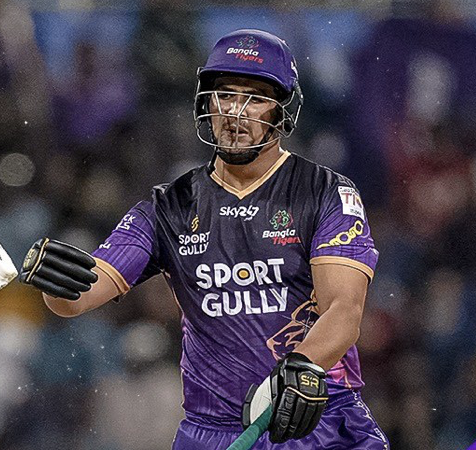 Two matches were played in the T10 league today on 26 November.

This was the first defeat for Team Abu Dhabi in this tournament so far but they are still on the top position with 10 points in 6 matches.

Team Abu Dhabi elected to field first after winning the toss but that didn’t go well for them as they failed to chase the target of 131 runs set by the Bangla Tigers.

Bangla Tigers lost their first wicket early but Hazratullah Zazai and Will Jacks made a 63 runs partnership.

They smashed the ball all around the ground for boundaries.

These two batters set the platform and gave the Bangla Tigers a dream start.

But after the dismissal of these two batters, wickets started to fall quickly and the run rate decreased a bit.

Bangla Tigers needed someone to finish their innings with some brilliant hard-hitting and that was done by Faf du Plessis.

The South African star, Faf du Plessis played a quick little cameo of 22 runs off just 8 balls smashing 2 sixes and a boundary to set 130 runs on the board for his side.

Team Abu Dhabi had a horrible start to their chase as they lost both of their openers back to back in the 3rd over.

Livingstone came at number 3 and he played a quick but short inning of 20 runs in just 6 balls including 3 huge sixes.

The “Universal boss”, Chris Gayle then joined the party and he thrashed the ball to all parts of the ground.

But the wickets kept falling from the other end causing their required rate to increase so much and in the end, Team Abu Dhabi lost by 10 runs.

Chris Gayle remained not out on 52 off just 23 balls including 5 sixes and 3 fours.

Gladiators lost 5 wickets while chasing just 58 runs. If 15 wickets have fallen in a T10 match then you can understand that how good the surface was for the bowlers.

Deccan Gladiators opted to bowl first after winning the toss and it proved to be a brilliant decision as their bowlers bowled beautifully to dismiss the whole Chennai team on just 57 runs.

Wanindu Hasaranga was the star with the ball as he picked up 3 wickets for just 9 runs.

He was also awarded as player of the match for his brilliant performance. Russell and Rumman Raees picked up 2 wickets each.

Gladiators also started very badly as they lost their top 4 wickets within the first 3 overs and they were struggling at 20-4.

The 5th wicket fell on 44 runs in the 5th over. Angelo Perera and Mark Deyal picked up 2 wickets each to put the Gladiators under pressure even while chasing a very small total.

Deccan Gladiators chased down the total easily at the end and they won the match by 5 wickets with 4 overs left.

This was a very convincing victory for the Deccan Gladiators and it will boost up both their confidence and NRR.