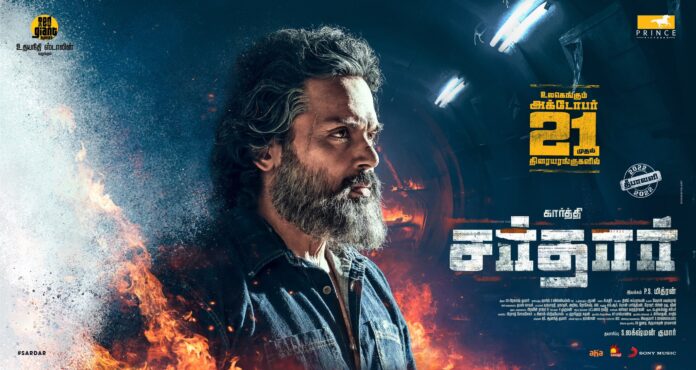 Synopsis: Inspector Vijaya Prakash believes that Bose his father, has betrayed the Indian Army until he unearths difficult realities about him.

According to The Hindu, Sardar is a direct ode to Lokesh Kanagaraj’s blockbuster film Vikram. Even though the trope is the same in both movies, Sardar has its own components and does not feel like a remake. Even though the director had an interesting and ‘masaledaar’ trope to play with, he just hasn’t left an impact like he was supposed to. The movie does not connect us to the character as it should have been. The betrayal of Bose should have left such an impact that we as the audience should have felt it. Although there were moments where the movie came through but there are also some moments that feel like the plotline is just too dumbed down for the audience. One thing which many filmmakers don’t get is that when casting actors in a double role, they should prioritize the interestig character rather than keep them for the end.

All in all, it’s a crime/spy thriller that you should definitely watch especially if you liked Vikram.

The Indian Express gives Sardar 3.5 stars out of 5. They are calling it “The firecracker Diwali needed.” Even though the film has its own set of cliches, it does not feel monotonous due to good writing and even better storyline. The movie has a lot going on but somehow it just fits and everything makes sense. Karthi has aced the double role so well, it feels as if there are actually 2 actors portraying the respective characters.

What keeps the audience glued to the film is the fact that the script never loses focus from the central plot. The bgm is a huge disappointment along with the music of the movie as well. The songs just don’t fit. Best thing is the climax hints at a sequel. So buckle up I guess?

Hat-trick for #Karthi in the same year💥💯#Viruman #PonniyinSelvan #Sardar pic.twitter.com/xZKWASIDbd

Inside reports for Diwali Movies,#Prince – Below Average😭😭#Sardar – Strong Content & Blockbuster 🔥💥🔥💥🔥

#Sardar getting positive reports from those who have watched US premiere show💥
Diwali winner🧐 pic.twitter.com/UBc7RVnGkZ