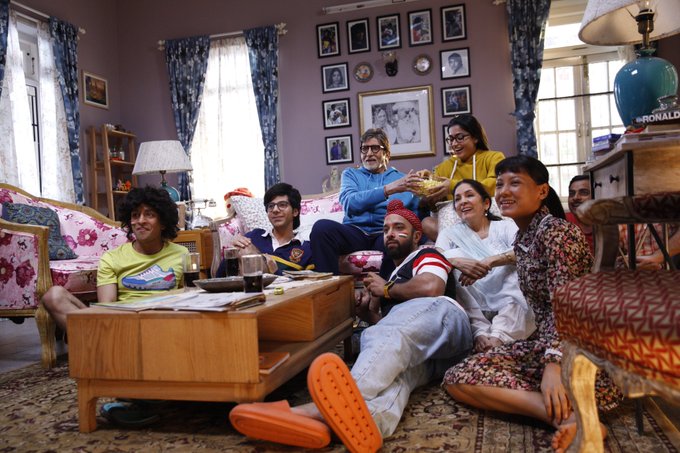 Goodbye starring Amitabh Bachchan and Rashmika Mandanna from the looks of it falls remotely under the category of movies like RamPrasad ki Tehrvi and Pagglait.

It showcases a dysfunctional family where BigB is the head father figure and Rashmika is the daughter. In the 3-minute trailer it’s revealed that Neena Gupta who plays Amitabh’s wife and Rashmika’s mother has passed away and what happens next is the plot of the movie.

It’s a drama movie laced with hints of comedy in the wake of tragedy. The agitation in the father-daughter relationship feels like the principal plot of the movie.

Additionally, a lot of dialogues and situations created in the movie would have been considered inappropriate but owing to the plot, fits perfectly and thus feels more like a dark comedy. Pavail Gulati, Shivin Narang, Ashish Vidyarthi, Elli Avram and Sunil Grover also star in Goodbye.

Rashmika was last seen in Pushpa – The Rise alongside Allu Arjun which gave her national recognition and Goodbye marks her Bollywood debut. Furthermore, she has Mission Majnu with Sidharth Malhotra and Animal with Ranbir Kapoor.

Goodbye directed by Vikas Bahl is going to release on 7th October 2022. Judging by the reactions of the audience on the posters and trailer of the movie, its expected to do well at the box office.

How will Goodbye fare at the Box office, only time will tell.

Salman and SRK back on screen together!! Read now to know more.