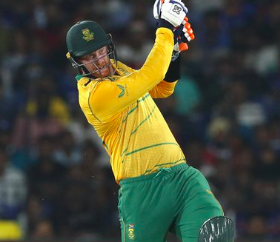 South Africa thrashed India by four wickets in a one-sided match on Sunday to take a 2-0 lead in the five-match series.

This loss underlined the continued dominance of SA over India.

From the Test at the beginning of the year to the last T20 against South Africa, the Indian team has lost to the Proteas seven times.

Kumar claimed three wickets in the Powerplay, pushing South Africa back in the very first over when he clean bowled Reeza Hendricks.

His next victim was Dwaine Pretorius who was sent as a pinch-hitter.

Knowing that Pretorius was looking to hit him off his lengths, Kumar pulled it back and utilised a change of pace to have the allrounder caught on the deep mid-wicket boundary.

Next, Kumar clean bowled South Africa’s Delhi hero Rassie van der Dussen with the penultimate ball of the Powerplay, to hav them reeling at 29 for 3.

South Africa’s fourth-wicket pair of Temba Bavuma and Klaasen took the chase by the scruff of the neck and scored 64 runs in 41 balls between them.

When Bavuma fell to Yuzvendra Chahal, Klaasen went on the offensive and registered his highest score in T20Is.

Klaasen smashed 7 boundaries and five sixes as he took a special liking to the Indian spinners.

He showed his class with a glorious innings of 81 runs that came off just 46 balls.

Interestingly, Klaasen was brought into the XI as the wicket-keeping replacement for de Kock but proved himself as a worthy batter too.

He was eventually dismissed by Harshal Patel.

Next Wayne Parnell fell to Bhuvi who returned excellent figures of 4/13 but by then, South Africa had the match in the bag.

David Miller, who was so crucial in their win in the 1st T20I, hit the winning runs with more than an over left.

Earlier, some brilliant bowling helped the Proteas restrict India to 148/6.

Shreyas Iyer top-scored for India with 40, while Ishan Kishan scored a 21-ball 34.

India were set for an even lower score, but Dinesh Karthik’s flourish at the death saw them add some respectability to the scorecard.

The veteran batter finished unbeaten on 30 off 21.

India has a problem

India looks like a collection of 11 talented individuals but are not gelling as a team.

Rishabh Pant’s captaincy has been unimpressive and lacking in imagination.

One of the problems could be – there are too many captains in the team.

Wonder, if there are too many cooks spoiling the broth and Pant is struggling to impose his authority.

If India has to bounce back, they need to play as a collective unit.