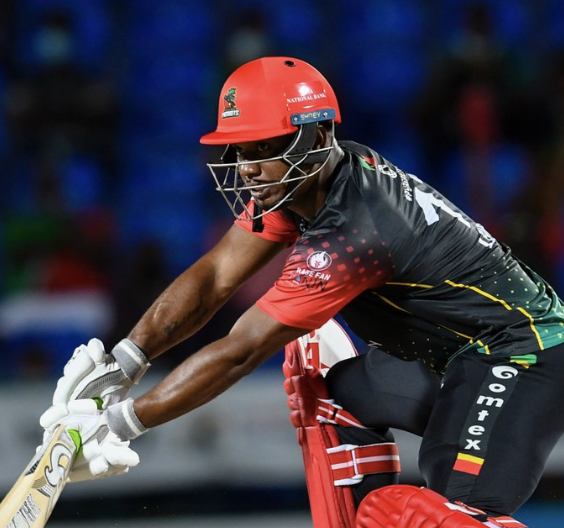 St Kitts & Nevis Patriots got back to the winning ways again with an easy win over Trinbago Knight Riders in the 27th game of the Carribbean Premier League.

Dwayne Bravo’s men chased down the 160-run target in 14.4 overs and eight wickets in hand.

This was their first win after losing three matches in a row.

Evan Lewis made the run chase a piece of cake for Bravo’s men.

He remained unbeaten for his 102 which include 11 huge sixes.

He was seeing the ball better than all batters on either side.

Another good thing that came out of the match is Chris Gayle’s form.

Mr Universe looked sublime for his 18-ball 35 as he has been in a form slump for a while.

If he can get going like Lewis, the Pats will not have a difficult time winning this year’s title.

Barbados Royals did not have a tough time chasing a mammoth target of 191.

Kyle Mayers bagged the Man of The Match for picking three scalps and scoring 81 unbeaten.

The Kings seemed to have enough runs on the board with almost every batter living up to the occasion.

However, their bowling let them down.

Mayers played a patient knock of 81 (62) to keep the scoreboard ticking for the Royals, whereas Glenn Phillips went ballistic.

Phillips’ 80 off 39 did the trick for Jason Holder’s men.

Just when the target was looking too big to get, his nine sixes and an inning of a 205 strike rate overwhelmed the Kings’ pace cartel.

Jeavor Royal bowled his two overs well, but they were nowhere enough to make up for the runs bowlers were conceding on the other end. He gave away only 3 runs.

This was only the Royals’ third win in 10 games.

Despite thrashing the Kings, they are at the bottom of the table with merely six points, whereas St Lucia are at four with five victories in the bag.