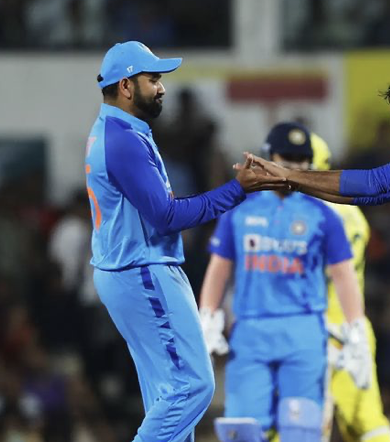 India notched up a series-levelling six-wicket win over Australia in a rain hit second T20I here on Friday.

Rohit Sharma was the star of the day as he displayed his six-hitting prowess with an unbeaten 46.

A wet patch in the outfield, thanks to Thursday’s rain, delayed the start by two and half hours.
Even when the umpires decided to go ahead, they did so by saying “although the conditions are not perfect, they are safe to play”.
India, bolstered by the return of Jasprit Bumrah, put Australia in after winning the toss.
With each bowler allowed up to two overs, they didn’t need a sixth bowling option.
So they decided to strengthen their batting, bringing in Rishabh Pant for Bhuvneshwar Kumar.
For the Aussies, Matthew Wade smacked an unbeaten 20-ball 43 to fire Australia to a 90 for five.
Wade hit four boundaries and three towering sixes — all in the final over off Harshal Patel (0/32).
Skipper Aaron Finch supported him with a blazing 31 off 15 balls.
Axar Patel was the pick of the bowlers snapping up two wickets in a fiery spell.
Rohit Sharma led the Indian reply with some imperious stroke play.
For the Aussies, Zampa bowled brilliantly picking up three wickets.
Rahul and Virat Kohli were bowled, and Suryakumar Yadav was lbw for a first-ball duck.
But Rohit found back-to-back fours off Sean Abbott to keep the asking rate under control.
Rohit was in fine form as he smashed four sixes and as many fours.
Eventually, Dinesh Karthik finished the job for India by smashing 10 runs in 2 balls.