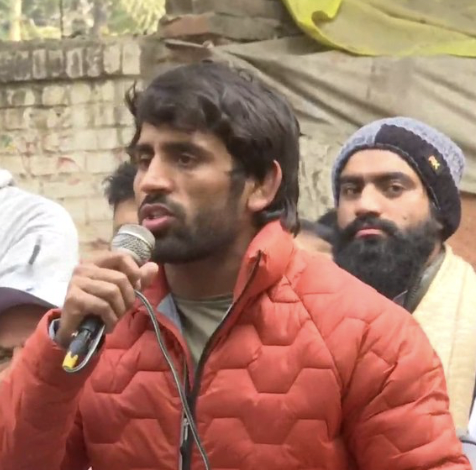 In an unprecedented move, they staged a four-hour-long dharna at Delhi’s Jantar Mantar on Wednesday, against the alleged “dictatorship” of Brij Bhushan Sharan Singh.

Phogat along with other wrestlers sit on a silent protest at Jantar Mantar for the second day against WFI chief on Thursday. She also urged the Prime Minister and Home Minister to intervene into the matter.

She said that Brij Bhushan Sharan Singh, president of the Wrestling Federation of India and other trainers were culpable.

“I know at least 10-12 women wrestlers who have told me about the sexual exploitation they faced at the hands of (the) WFI President. They told me their stories.”

“I can’t take their names now but I can definitely reveal the names if we get to meet the Prime Minister and the Home Minister of the country,” Vinesh said addressing the media after the protest.

“Babita Phogat has come from the government’s side for mediation. We will speak with her and then give more details,” said Olympian wrestler Bajrang Punia.

The BJP MP has denied the allegations, saying he will “hang himself” if it is proven to be true. “There has been no incident of sexual harassment. If such a thing has happened, then I will hang myself… I am ready for an investigation,” Singh said.

Phogat’s fellow wrestler and Olympic bronze medallist Sakshi Malik, who was also part of the protest, endorsed the allegations. “Athletes work hard to win medals for the country, but the federation has done nothing but let us down,” she said in a tweet post.

According to reports, the Sports Ministry of India has asked the federation to respond to the allegations within 72 hours.

“Our fight is not against the government or Sports Authority of India (SAI). This is against WFI. We will share details later in the day. Yeh ab aar paar ki ladai hai (This is a fight to the finish line),” Bajrang Punia said.

The group of protesting wrestlers said that they will not accept the way Singh, who is also a Bharatiya Janata Party (BJP) MP from Uttar Pradesh’s Kaiserganj, was running the Wrestling Federation of India (WFI).

The primary and most important demand of the protesting wrestlers is that WFI president Brij Bhushan Singh should be removed from the top post. Singh has held the position since 2011 and was elected as the president for the third consecutive time in February 2019.