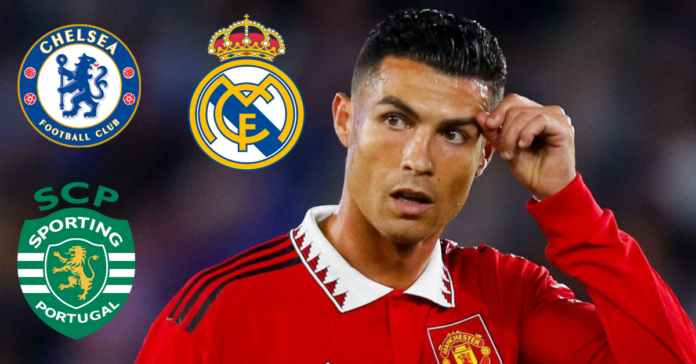 What are Cristiano Ronaldo’s options?

Cristiano Ronaldo may have played his final match for Manchester United after his explosive interview with Piers Morgan, saying he has no respect for manager Erik ten Hag and feels that he is being forced out of the club.

With less than a year left on the two-year contract he has at the club, it has been claimed that the club and the manager will not stand in Ronaldo’s way should he decide to exit Old Trafford for the second time in six months. Cristiano Ronaldo with his agent Jorge Mendes had tried to get a transfer before, but no club at that time was interested in signing the Portuguese star.

It’s likely that the forward has played his final game for United, with a January move now set to be his priority.

Chelsea at this point is looking as the favorite to sign him, let us take a look at the Top 5 clubs Ronaldo could potentially make a move to

Chelsea was linked with a switch for the Portuguese throughout the summer, but Thomas Tuchel who was in charge at the club. New arrival Pierre-Emerick Aubameyang – who joined the club to be reunited with Tuchel – has scored a handful of goals but hasn’t exactly hit the ground running, so Chelsea may revive interest in Ronaldo.

Cristiano Ronaldo is the club’s greatest goal scorer ever, scoring 451 goals in 438 appearances. He is the only player in Los Blancos history to have scored goals at a rate of more than one goal per game and he won four Champions Leagues as well as four Ballons d’Or during his time at the Santiago Bernabeu. A move here would see him reunite with Karim Benzema and manager Carlo Ancelotti.

A return to his boyhood club would signal an emotional one for the forward having started his career with the Portuguese giants. The striker’s mother was thought to be a big fan of her son going back to potentially one day play with his own son.

She said: “Cristiano has to come back here. If it was up to me he’d be back already. I already told him: ‘Son, before I die I want to see you playing for Sporting again. It didn’t happen this year but perhaps it will next year. But if it’s not him it will be Cristianinho. At his age, he plays better than his father. When he was 12 Cristiano didn’t have a trainer but today he’s his son’s teacher.” she continued

Three teams in the United States want to bring Cristiano Ronaldo to MLS. The 37-year-old Portuguese international is likely to be back in Europa League action tonight but is set to leave the club when his contract is up in 2023. LAFC, LA Galaxy, and Inter Miami are all keen on signing the forward on a free transfer.

Should Ronaldo choose to leave European football in its entirety, he could potentially explore a move to the Saudi Arabian league.