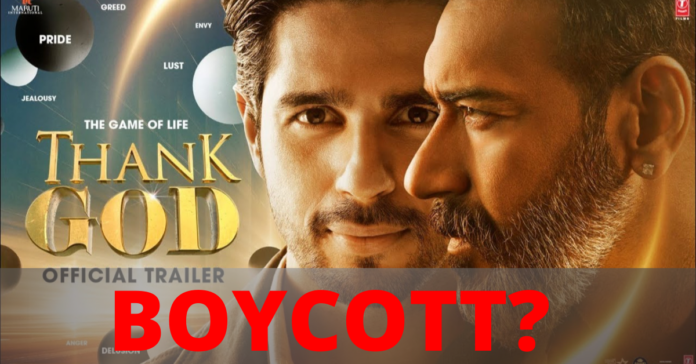 After Brahmastra, it is Ajay Devgn and Sidharth Malhotra’s upcoming movie Thank God that has attracted backlash on social media

Netizens are calling for the Boycott of the film “Thank God” claiming that it mocks Hindu Gods.

Ajay Devgn, whom we recently saw in the film De De Pyaar De and is currently busy shooting for Tanhaji: The Unsung Warrior, will next be seen alongside Sidharth Malhotra in a comedy-drama titled Thank God.

The story of the movie is that Ajay Devgn plays the role of Lord Chitragupt. He is the Lord of Karma and responsible for bringing justice.

Fans are unhappy over how Lord Chitragupt is being portrayed. Ajay Devgn is shown seated in a massive mansion with women standing behind him. Netizens claim that the whole plot mocks Hindu Gods.

One of the comments read, “Another attempt has been made by Bollywood to insult Hindu religion and their god’s by releasing the trailer of Thank god by showing Chitragupta, lord Yama jokes have been made and lust feelings such bad deeds have been shown in the film. We should unite to #Boycott_ThankGodMovie.”

Thank God the movie has also landed in legal trouble

A local court in Surat has ordered an interim stay on the release of the film after hearing a petition filed by a former city mayor who claimed that he had been working on the script of a similar film with the same name. However, the makers have said that they had registered the title with the Indian Motion Pictures Producers Association (IMPPA) and Film Writers Association (FWA) back in June 2018.

Meanwhile, the case was heard by District Judge MS Patel who ordered a stay on the film’s release until further notice. He said, “An interim stay is granted on releasing of movie Thank God till further orders.”

As per PTI’s report, Aditi Desai, who is representing IMPPA and FWA told the court that both these associations have registered more than 22 titles of films with similar names. She also reportedly informed that Rajiv Arora had taken membership of IMPPA in June last year and registered his copyright on his story titled Thank God.

The makers of the upcoming film Thank God, starring Ajay Devgn, Sidharth Malhotra, and Rakul Preet Singh, are reportedly facing legal trouble with a Delhi-based lawyer, who has claimed that he owns the rights to the film’s title.

According to a report by Mid-Day, lawyer Dr. Satya Ranjan Das filed a petition before the Bombay High Court on Thursday stating that he owned the rights of the film’s title “Thank God” after registering it with the Indian Performing Rights Society (IPRS) in 2018.

In his petition, he claimed that in 2019, he came to know about the film Thank God and made several attempts to get in touch with the makers and the actors but failed to reach them. So he had sent a notice on January 15 this year demanding that they stop using his trademarked title. However, even after sending two notices, they did not respond, according to Mid-Day.

Dr. Das has also requested the court to direct authorities not to register or certify any objectionable content under his trademarked title “Thank God”. He has also demanded a compensation of `75 lakh from the film’s producers over damages for using his registered title without permission.

The matter is still pending for hearing at the Bombay High Court.