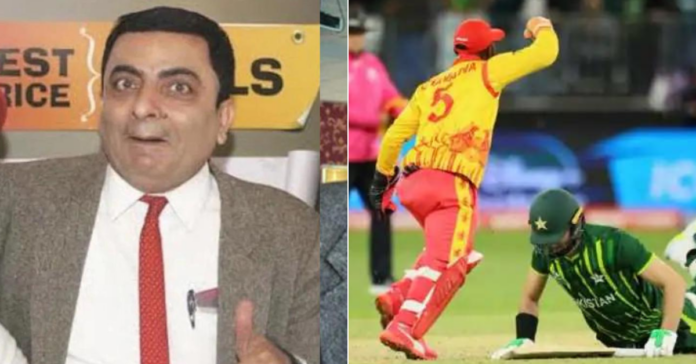 On the game eve, when the official handle of Pakistan Cricket posted training pictures, a purported Zimbabwean handle Ngugi Chasura replied, “As Zimbabweans, we won’t forgive you. You once gave us that Fraud Pak Bean instead of Mr. Bean Rowan. We will settle the matter tomorrow. Just pray that rain doesn’t save you”

When a Pakistani fan asks him to explain, he replied, “they gave us Pak Bean instead of Mr. Bean in one of our local events called Agricultural show”. And he tweeted a pic of the Pakistani look-alike at an event. “This is … Pak Bean who imitates Mr. Bean stealing people’s money”.

The “fake Pak Bean” is Pakistani comedian Asif Muhammad, who was invited to a comedy show in Harare in 2016. A popular doppelganger of the famous Rowan Atkinson character Mr. Bean, he performed, attended road shows, and made a part of the Harare Agricultural Show.

The match was dubbed the “Mr. Bean derby” as the news went viral on the internet. Zimbabwe’s President decided to join the fun and after the historic win for his team, decided to tweet a joke on the topic.

In the actual match, Zimbabwe scored 130 for 8 batting first before restricting Pakistan to 129 for 8, earning a hard-fought 1-run victory.

The hilarious viral meme was brought up on a show on Samaa TV where Shahid Afridi was a panelist. The host reminded Afridi that he had acted in an advertisement with the fake Mr Bean in Pakistan.