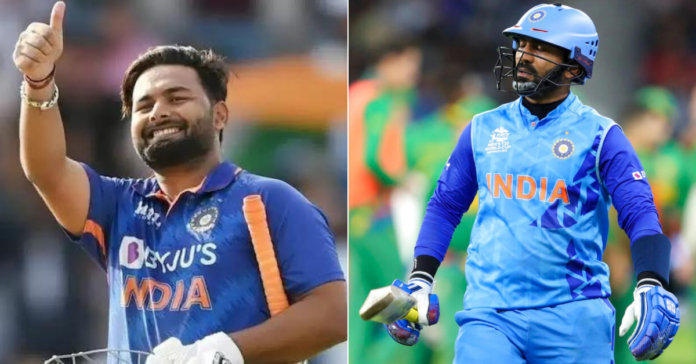 The selection is gonna be a toss-up between the two.

As Team India gears up for the semi-finals against England, the dilemma of selection between Rishabh Pant and Dinesh Karthik has been a concern as both have not been able to cement their spot in the ongoing T20 World Cup.

Rohit Sharma says both of them will stay in contention

Ahead of the game, skipper Rohit Sharma addressed a press conference, where he spoke about the team’s preparations and what sort of combination the side might go in with.

Wicketkeeper-batter Rishabh Pant was given a chance in playing XI in India’s last Super 12 game against Zimbabwe, and he had come into the lineup in place of Dinesh Karthik. However, Pant was disappointed as he scored just 3 runs.

“Between DK and Pant, I had just during the last game as well, Pant was the only guy who did not get to play on this tour at all except the two games we played at Perth. They were unofficial practice games but since then he has not had a hit. He was missing game-time, so we wanted to give him time and have some options as well if we want to make changes in the semi-final or final,” said Rohit during a pre-match press conference.

“It will be unfair to bring a guy out of nowhere and make him play the game, so that was the thought. But again, we have told the guys that everyone needs to be ready for whichever game they play, whether it is the semis or league games. It was a little tactical as well considering we did not know which team we would play in the semi-final before that Zimbabwe game. We wanted to make sure to give the left-hander an opportunity to counter those spinners who bowl in the middle. But again, what is going to happen tomorrow, I cannot tell you now but both of those keepers will be in play for selection,” he added.

“Difficult one. For me, absolutely no doubt, DK should be there. Knock-out stages, he’s experienced, I would want him. But, here’s the curveball, I would want Pant in the team as well. I would find another spot for him. I don’t know who makes way for him,” AB De Villiers said on his official YouTube channel.

India last won the T20 World Cup in 2007, and it has been nine years since the country last won an ICC event. It was under MS Dhoni’s leadership that India won the Champions Trophy in 2013 and ever since then, an ICC title has eluded Team India.