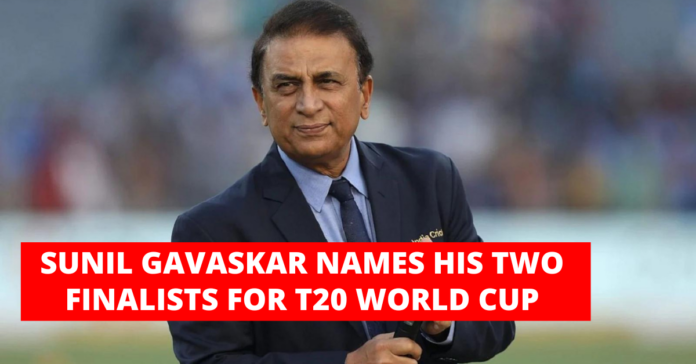 Sunil Gavaskar has named India and Australia as his two finalists

The T20 World Cup has been a rollercoaster ride till now and the ongoing qualifiers have seen Namibia upsetting Sri Lanka and Scotland beating West Indies.

“India, definitely. And because I am in Australia so I am going to say Australia,” Gavaskar said on Star Sports before the warm-up match between India and Australia on Monday.

Talking about the same, Tom Moody said: “I am going to give you the top four. Australia and England will go through from their group. I think Pakistan and India would be leading the other group. The finalists, I have to say Australia and India.”

The Super 12 stage will get started on Saturday with Australia squaring off against New Zealand. Team India will begin their campaign on October 23 against Pakistan at the Melbourne Cricket Ground.

Team India defeated Australia by 6 runs on Monday in a warm-up fixture after Mohammed Shami defended 10 in the final over.

“If you have a long batting line-up, that’s the way you should be playing. Yes, we want to see him bat longer, we want to see him bat for 10-12 overs because then you are pretty certain. Because in those 10-12 overs, India is 120-odd with the way he bats. But because he is getting India to flying starts and because he has got 5,6,7 who can take the game away? Today look at the way Hardik Pandya came in toward the end. With that kind of batting order, you can take chances,” Sunil Gavaskar said on Star Sports.“Clearly, getting the captain of a team is always a big plus for the opposition. It’s like getting the head of the snake is what they say. That’s why if you are an opening batsman, bowlers will target you – the captain. Get you to demoralize the side. But this side has so many class players.”