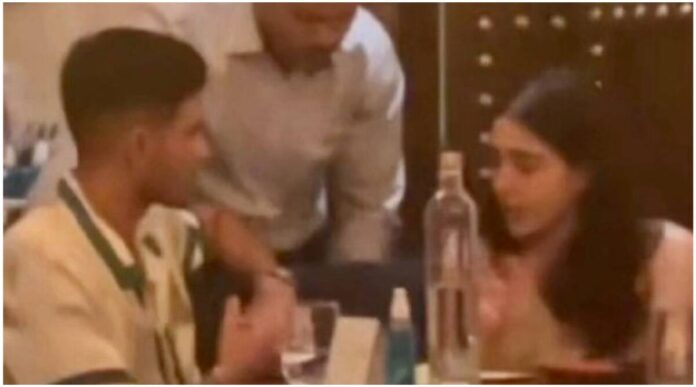 Shubman Gill and Sara Tendulkar unfollowed each other on Instagram indicating a breakup.

Sara Ali Khan is claimed to have dated Karthik Aaryan while shooting for Love Aaj Kal 2 but they broke up soon after.

Sara Ali Khan and Shubman Gill dating each other?

A fan spotted the two at a restaurant and shared their video on TikTok, which fuelled speculation that Sara and Shubman are dating

The clip was followed by a photo of the actor sitting across the table from Shubman Gill.

The venue is written as Bastian in Mumbai, further reports indicate that the two were in Dubai.

The dating rumors of Bollywood celebrities and cricketers are nothing new.

There has always been a link-up between cricketers and actresses.

Recently, Urvashi Rautela and Rishabh Pant were a topic of discussion on Social Media.

Sara and Shubman unfollowing each other on Instagram and then having dinner together was enough reason for the series of reactions by the Twitter users and circulation of hilarious memes.

Netizens had a field day soon after Gill’s pictures with Khan start doing the rounds.

The fans were excited to find the Sara link and used unique memes and jokes to convey their feelings.

Gill, who had won two back-to-back Player of the Series awards in ODIs against the West Indies and Zimbabwe, has represented Men in Blue in 11 Tests and 9 ODIs.

It will interesting to see what speculation will come up in the coming days.