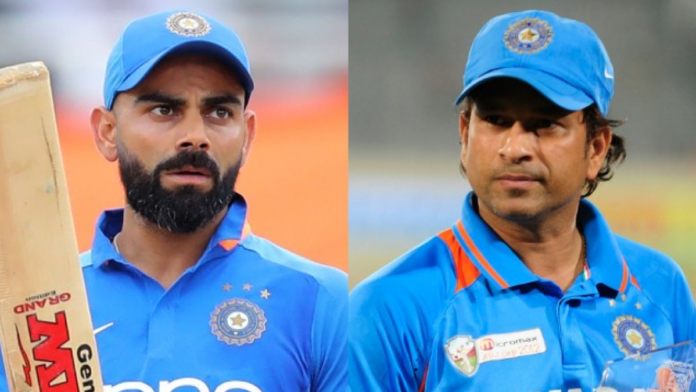 Ricky Ponting spoke about this during the latest episode of ICC Review on Monday. Virat Kohli scored his much-awaited 71st International Century in the recently concluded Asia Cup 2022.

The talks and questions about Virat Kohli surpassing the all-time great Tendulkar in the tally of centuries have picked up once again.

Ponting says he doesn’t rule it out from happening

“If you would have asked me three years ago, I would have said yes. But the fact that it has slowed down as much as it did… yeah, I still think that it is possible for him, there is no doubt. I still think he has got a number of years ahead of him, but I guess to still be 30 international hundreds behind, that’s a lot,” he said.

Ponting was vocal in his support for Virat even when many called for him to be dropped and even now, he has a lot of positives to say about the star Indian batter. He is happy that Virat is among the runs.

“It was only a matter of time. It has (the century) taken a bit longer, the last couple of years because he has been in that century-making drought if you like, it has taken a bit longer to get to me than I thought it was going to.” Ponting said

“But look, he is obviously one of the all-time greats and there is still a long time to go in his career. It was good to see him back in the runs,” he added.

Should Kohli open for Team India as the ICC T20 World Cup approaches?

“The question we are going to keep asking is – well I am sure, the Indian selectors are asking the same question – does that create more of a problem than we thought with Virat getting that 100 openings the batting? What are we going to do now going into the World Cup?” Ponting said.

“So there are a few other questions that are probably raised on the back of that magnificent 100 that he made. He was even on record saying that he was surprised himself that the first 100 back was actually in a (T20I) game. He thought that that would be the last option he would have to score his first hundred in a couple of years,” said Ponting about this matter.

“It is great to see him back in the runs. Great to see him back with a smile on his face. That’s the thing you know. He was so happy, and I guess (he’s) relieved at the end of that game. He obviously spoke very fondly about his wife’s influence on the last couple of years of his life as well, which is also very nice to hear,” he said.

“A lot of that stuff goes unspoken about, in men’s sport in particular. Just the impact that your family and your very close ones have on you through your career. So it is nice to hear that but also great to see Virat back in the runs again,” he added.