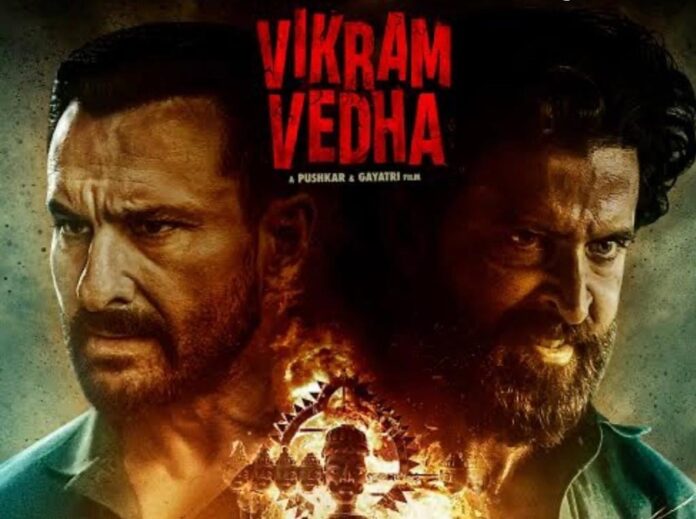 The much-anticipated movie Vikram Vedha was released in theatres today.

As per the review of Indian Express, The original Vikram Vedha which was released in 2017 was as good as they come. There was a scare that a remake might ruin the franchise even though the director duo is the same for both. But this almost faithful to the original does not disappoint. Mainly because the story fits perfectly with Hrithik and Saif in it.

Bollywood believes in good looks and oozing swag, especially for action thrillers. This movie is just that. Saif Ali Khan’s Vikram is far more badass than R Madhavan and Hrithik has nailed it out of the park with Vedha.

In the original, the supporting actors didn’t have that much to work on but the remake allows them to showcase their talent. The only downfall is the unnecessary dance song but its kinda inevitable when you have Hrithik on board. All in all, not bad at all and definitely worth watching. Indian Express gives the movie 3 stars out of 5.

According to NDTV’s review, Both Hrithik and Saif have given stellar performances. Saif is a better Vikram and Hrithik makes it look as if the role of Vedha was made for him. This remake is so full of style and swag, its practically oozing out. Just like the original, its a mass entertainer for all ages. Inspired by the popular folktale, ‘Betaal Pachisi’, the movie has all the elements required to make it a hit and keep you on the edge of your seat provided you haven’t watched the original.

Each time Vikram thinks he has eliminated Vedha, he comes in strong and convinces Vikram to listen to just 1 more story and decide what’s right and what’s wrong. Morals, ethics and the thin grey line between good and bad is the spine of the story. NDTV gives Vikram Vedha 3 out of 5 stars. Definitely watch it.

Koimoi, gives the movie 3.5 stars out of 5. According to their review, Bollywood needed this movie to restore the faith of people because what better than an action thriller that keeps you entertained till the end? Saif Ali Khan and Hrithik Roshan are both powerhouses of acting and screen presence and they showcase the same in this movie. The story is just like the original with some minor changes and it takes place in Lucknow which plays an important role in the story.

Just like in ‘Betaal Pachisi’, Vedha pulls Vikram in with his stories, his complex set of questions and sows the seed of doubt in the cop’s mind. By the 3rd story, the movie takes drastic change which makes the climax all the more impactful. Despite the long run time, do not miss watching this movie in theatres.

If you aren’t convinced to watch the movie yet, here’s what the audience thinks;

#VikramVedha is a running Maze with
Vedha screaming I'M VENGEANCE & Vikram calmly & confidently unraveling the twists and turns.@iHrithik has crafted another layer of VEDHA presenting him into a distinctive character from #VijaySethupathi portrayal.

Looks like its going to be a hell of a weekend. Watch Vikram Vedha in your nearest theatres asap.