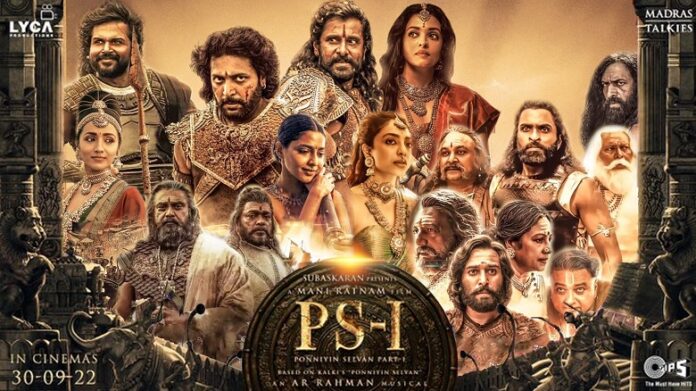 The premiere of Mani Ratnam’s masterpiece Ponniyin Selvan 1 has been released today.

According to Pinkvilla, the film gets 3.5 stars out of 5. The first half of the movie is Karthi’s character Vallavaraiyan Vanthiyathevan’s completely. He shapes the story in numerous adventurous ways. Aditha, played by Chiyaan Vikram can be seen making memorable appearances. It takes a little over an hour for Arulmozhi Varman (Jayam Ravi, the titular character) to create an impact.

Aishwarya Rai Bachchan who plays the role of Nandini is a character of many levels, each of which the actress showcases rather gracefully. Trisha knocks it out of the park with her performance especially if considering the possibility of a sequel in the coming years.

The conflict which makes up the story of the movie is very consistent. However, the revenge trope isn’t overdone nor are the sad moments. Overall, a great epic from Mani Ratnam.

According to the Hindustan times, Mani Ratnam has done what many have tried but failed. Adapt a literary masterpiece with the same impact and panache. Even though all the actors have done a tremendous job, it’s Aishwarya Rai Bachchan aka Nandini our main antagonist who steals the show.

Mani Ratnam is called a storyteller for a reason. This is his most ambitious film to date and he delivers thoroughly with enough intrigue, thrill, and magnificence. Don’t walk in expecting a whole lot of action sequences since Mani Ratnam relies on drama to create the necessary tension. One downfall is that the characters don’t get the epic highs they deserve. For eg; Arulmozhi Varman (Jayam Ravi) is the Chola kingdom’s successor. Despite being such a strong character, his debut scene is shallow and lackluster.

The writing makes up for the lack of crowd-pleasing moments. All in all the casting was superb which can be seen in the movie. Mani Ratnam knows how to extract the most out of his actors. AR Rahman as usual is the icing on the cake.

As per The Hindu, the only problem with PS1 is comparison. People who are familiar with Kalki’s work will constantly compare the characters and action fanatics will compare it to Baahubali or RRR owing to all the war sequences.

But leave it to Mani Ratnam, to satisfy both types of audiences. His masterful writing has lifted the movie and the all-star cast has done such a great job, it’s hard to find flaws in their performances.

This story can be told in a variety of ways, but author Kalki and director Mani Ratnam have chosen to tell it through Vanthiyathevan’s eyes (Karthi). Despite having no further link to the plot other than being Aditha Karikalan’s (Vikram)  companion, he serves as the film’s main point of view. Vanthiyathevan has a wide-eyed expression whenever he learns something new. Identical to us.

The film in its brilliant writing has equal amounts of valor, greed, honesty, and treachery to keep you hooked. The best ability of this movie is to make the audience travel back in time. The second installment of this movie is much awaited and much can be said. Stellar performances by the entire cast throughout.