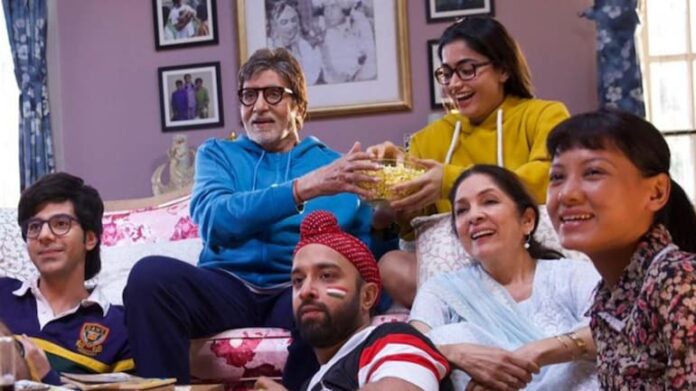 As per Hindustan Times, this movie is nothing more than a Funeral drama. Yes, it’s a funeral drama. It’s insensitive, absurd, and downright confusing. The matriarch of the family (Neena Gupta) has passed away and the family is looking to kill time at the cremation ground while they wait their turn.

The film is confusing as it tries to establish a sub plot and fixate on it but fails to do so. The comedy is in your face instead of being subtle. It becomes disrespectful at one point to the tragedy in the midst. Amitabh Bachchan as usual gives his sincere 100% performance and as for Rashmika Mandanna, she was decent enough.

In Vikas Bahl’s Goodbye, none of what could make it work above and beyond the surface level is given much space. Goodbye will cause you to cry a lot, but it will not teach you anything about the process of processing and letting go of pain. Sluggish, insubstantial, and meandering, Goodbye lacks the gravitas one would expect from a film claiming to be a mature, sensitive examination of sorrow and its manifestations. Worse, some parts of the film appear to trivialize the act of mourning and remembering. Goodbye alternates between the sad and the funny.

With a grief story that makes the most of this genre’s clichés, it is always simple to drive spectators to tears. The family dog, a Golden Retriever named Stupid, who hangs around the photo of the woman who brought him home as a puppy is the only truly desolate character in this movie. The human characters surrounding the dog are too haphazardly and laboriously developed to be consistently compelling.

According to The Hindu, Vikas Bahl, the writer-director of the film Goodbye, examines how different people deal with sorrow in different ways. There is no one to weep on for Harish (Amitabh Bachchan) when he loses his wife Gayatri (Neena Gupta). The neighbours are more interested in gossip and offering flimsy advise while his children are preoccupied with employment and parties.

Rashmika does a good job portraying the angry daughter. However, Tara’s rage at her father is still unjustified.

The second half of the movie, which is carried by a melancholic Bachchan, features an endearing Sunil Grover as a laptop-wielding priest discussing the deeper meanings of life and death and how memories become stories that continue to nourish us. However, despite their best efforts, they are unable to save the movie from its inherent shallowness in writing and treatment.

Well, looks like a one time watch with your family. Let’s see what the audience thinks of Goodbye.