Nagelsmann to Bayern: How and why it happened 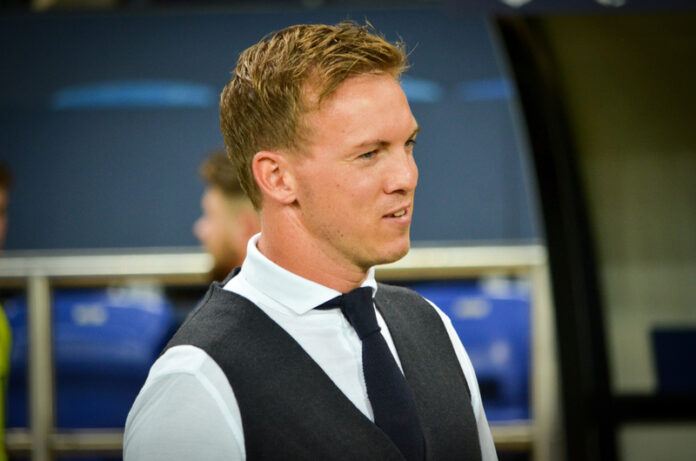 Ever since Hansi Flick announced that he would leave Bayern Munich at the end of this season, the rumour mill started heating up linking a host of high-profile managers with the Allianz Arena hot seat.

All speculations came to an end when Julian Nagelsmann was named as Flick’s successor.

Nagelsmann, 33, is one of the youngest managers in the game, but he has already enriched his resume to such an extent that a European powerhouse like Bayern Munich is entrusting their future to him.

He has some pretty big shoes to fill at Bayern.

But, within that time, he guided the club to a treble, won UEFA’s Manager of the Season crown, and all but ensured Bayern’s Bundesliga triumph this season. He set the bar to an astounding height.

Nagelsmann has earned his name as a tactical genius.

During his Hoffenheim and Leipzig days, he exhibited his ability to read games and nurture young talents.

On paper, it seems like the Bayern Munich hierarchy has found the right candidate to sustain the team’s dominance.

How Bayern Got Nagelsmann

Bayern Munich CEO Karl-Heinz Rummenigge was hopeful of convincing Flick to extend his stay at the club.

But, when it became evident that the former Germany assistant manager will not turn down the Die Mannschaft job, he started the proceedings to find a suitable candidate.

So, when Flick made it clear that his race has been run as a Bayern manager, Nagelsmann became one of the top candidates for the vacancy.

Kahn, who will replace Rummenigge as the Bayern CEO next year, approached RB Leipzig CEO Oliver Mintzlaff to begin the proceedings.

Salihamidzic was also involved in the talks. The word on the street is that Bayern had to pay €25 million for Nagelsmann’s signature.

Rummenigge played down the claims that Bayern had paid a world record fee for a manager to get Nagelsmann on board.

However, reports coming out of Germany are still suggesting that Leipzig received a hefty sum of €25 million to let go of their manager.

What Tactical Changes Will Nagelsmann make?

But, all of them are on the wrong side of their thirties. So, Bayern Munich will have to nurture a youthful core going forward.

Developing young players is one of Nagelsmann’s managerial strengths.

He has managed youth teams at 1860 Munich, but it was at Hoffenheim where he honed his skill to polish uncut gems.

He made history leading a youthful Hoffenheim side to their first-ever Champions League spot finis in 2016/17.

During his RB Leipzig stint, he brought the best out of youngsters like Timo Werner, Ibrahima Konate, Dayot Upamecano, and Cristopher Nkunku.

Therefore, Nagelsmann can be the perfect man to oversee the change of guard at Allianz Arena and inspire a new generation of players.

Bayern Munich have been sloppy at the back, despite enjoying tremendous success under Flick.

Their defensive vulnerabilities were exposed in the Champions League tie against PSG. They also shipped 40 goals in the league this season, which is further proof of their defensive insufficiencies.

Nagelsmann has been compared with Jose Mourinho for the defensive solidarity of his teams.

However, Nagelsmann’s philosophy of defending differs from that of Mourinho’s. Instead of deploying a defensive block like the Portuguese, Nagelsmann uses his defence as a medium of pressing.

Nagelsmann attempts to limit the passing options of opposition forwards by deploying his fullbacks at advanced positions.

In tandem with wingers, fullbacks, and a central midfielder, Nagelsmann’s teams nip the opposition attack in the bud through counter-pressing.

At Leipzig, Angelino occupied the most advanced positions on the pitch in average, despite playing as a wing back.

Therefore, he was able to make as many as 17 goal contributions for Die Roten Bullen. Nagelsmann can find a similar sort of dynamism with Alphonso Davies and Benjamin Pavard as wingbacks at Bayern.

Joshua Kimmich can also play wingback, if Nagelsmann doesn’t use him as a holding midfielder.

Dayot Upamecano will continue working with Nagelsmann at his new club.

Since David Alaba and Boateng would be leaving at the end of this season, we can say with almost certainty that the Frenchman will be the new face of Bayern’s new defensive core.

If Nagelsmann opts for a three-man defence, Lucas Hernandez will occupy the left side of the defensive three.

On the right, it could be Pavard, but his attacking attributes could be a better suit for an advanced position. Therefore, Niklas Sule, who played for Nagelsmann at Hoffenheim, would be in contention to play as the right-sided centre-back.

The reliance on wingbacks indicates that Nagelsmann wants his teams to construct their attacks through the flanks. The likes of Kingsley Coman, Alphonso Davies, Leroy Sane and Serge Gnabry should thrive in this model.

With more proactive wingers, there would be more space left to exploit for the centre forward. So, don’t expect Robert Lewandowski hitting a dry patch in the near future.

In Julian Nagelsmann, Bayern Munich will be getting a tactical mastermind.

Hopefully, he will get the freedom to implement his ideas at the club. It is impossible to build a successful team without a harmonious relationship between the manager and the authority.

Hopefully, the Bayern Munich administration will realize that and let Nagelsmann work his wonders.