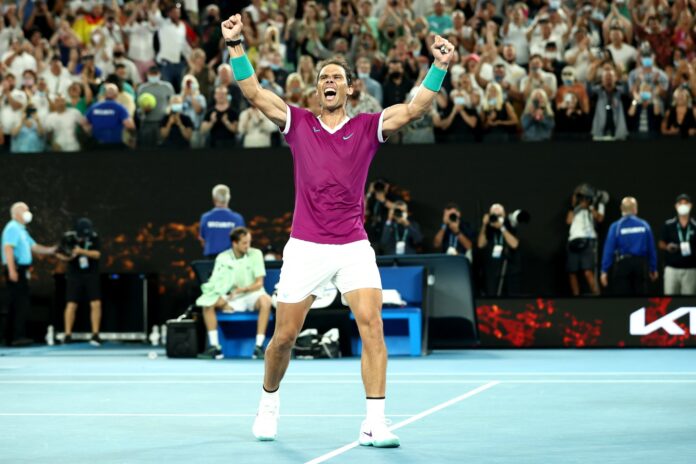 Rafael Nadal came back from two sets down to beat Daniil Medvedev in an almost 5 1/2-hour Australian Open final.

It was the second-longest Australian Open final ever, after Nadal’s loss to Djokovic in the 2012 decider that lasted 5:53.

He broke the men’s record for most Grand Slam singles titles.

The 35-year-old Spaniard now has one more major title than Roger Federer and Novak Djokovic, his long-time rivals in the so-called Big Three.

His victory was even more remarkable considering Nadal flew to Australia with just two matches under his belt in the second half of 2021 because he was sidelined with a chronic foot injury.

He also overcame a bout of Covid-19.

Nadal won his first Australian Open title in 2009 and lost four other finals at Melbourne Park before his dramatic win over U.S. Open champion Medvedev.

He is the first Australian Open champion to come back to win after dropping the first two sets of the final since Roy Emerson in 1965.

“For me, it’s just amazing. Being honest, one month and a half ago, I didn’t know if I’d be able to play on the tour again,” Nadal said.

“Without a doubt, (it’s) probably been one of the most emotional months in my tennis career.