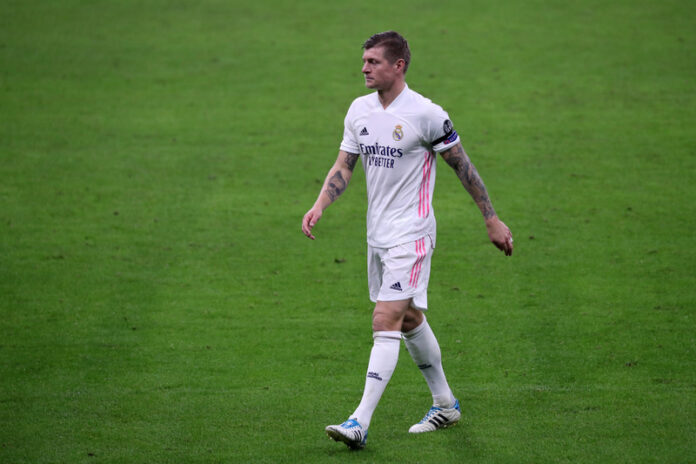 Real Madrid’s almost blew up their title hopes with a a controversial 2-2 draw against Sevilla at the Estadio Alfredo Di Stefano.

However, it would have been far worse but for Toni Kroos.

Till the 87th minute, Real Madrid was trailing 1-2 when the German’s fierce shot took a huge deflection off Eden Hazard and rolled past Bono to make it 2-2.

The result is not likely to please the Los Blancos fans who are still in shock after their elimination from the Champions League at the hands of Chelsea.

This match will be remembered for the dramatic intervention of VAR which cancelled out a Real Madrid penalty and instead, awarded a Sevilla penalty in the second half.

A Madrid counter attack resulted in Benzema being felled by Bono and when the penalty was referred to VAR, it showed that Eder Militao had handled the ball inside the Real Madrid D before the counter attack started!

Bizarrely, Sevilla were the ones celebrating when referee Juan Martinez Munuera pointed to the spot.

Rakitic stepped up and made no mistake as he slotted home to make it 1-2 Sevilla lead.

Earlier, VAR had once again come to Sevilla’s rescue.

Real Madrid thought they had taken a 1-0 lead early on through a perfectly struck Benzema header off an Alvaro Odriozola cross, but VAR stepped in and ruled that the right-back was a step off-side.

Sevilla took the lead through Fernando, who received a lightly weighted header from former Barcelona man Rakitic, made a slight move and fired a left-footed into the net.

However, Real Madrid continued to attack, resulting in a fiercely struck shot from Benzema that had to be tipped over the crossbar.

Midway through the half, Zidane brought on Marco Asensio and Miguel Gutierrez for Luka Modric and Marcelo.

Asensio immediately made an impact with a sweetly struck a first-time shot off a perfectly executed assist from Kroos to level the score at 1-1.

The big talking point before the match was the exclusion of Hazard from the playing XI.

The Belgian had raised the hackles of the Madridistas for laughing and joking around with former Chelsea teammates after their Champions League loss.

Instead, Fede Valverde started in the frontline, alongside Karim Benzema and Vinicius Junior.

Sevilla endured another tense moment towards the end when Nacho rolled the ball towards Casemiro whose right-footer sailed just wide of the post.