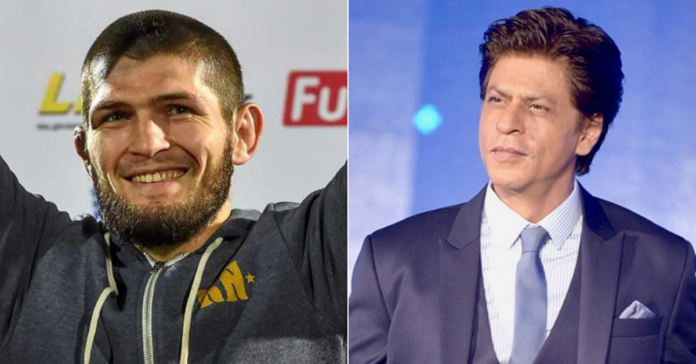 Khabib has named SRK as his favorite actor.

The UFC Legend Khabib Nurmagomedov loves watching Bollywood movies and his favorite actor is Shah Rukh Khan, he revealed the same during his appearance on the Muslim Money Guys podcast.

Shah Rukh Khan is one of the most popular actors in the world and enjoys immense popularity outside India also.

Who is Khabib Nurmagomedov?

Khabib Abdulmanapovich Nurmagomedov (born 20 September 1988) is a Russian former professional mixed martial artist. His interest in martial arts began when watching students training at the gym. Khabib’s training as a child included wrestling a bear when he was nine years old. As is common with many children in Dagestan, he began wrestling from an early age: he started at the age of eight under the tutelage of his father, Abdulmanap Nurmagomedov.

He competed in the lightweight division of the Ultimate Fighting Championship (UFC), where he was the longest-reigning UFC Lightweight Champion, having held the title from April 2018 to March 2021. Nurmagomedov was inducted into the UFC Hall of Fame on June 30, 2022. With 29 wins and no losses, he retired with an undefeated record.

A two-time Combat Sambo World Champion, Nurmagomedov has a background in the disciplines of sambo, judo, and wrestling. Nurmagomedov was ranked #1 in the UFC men’s pound-for-pound rankings at the time of his retirement, until being removed following his title vacation in March 2021. Matrix ranks him as the #1 lightweight of all time.

Coming from the Republic of Dagestan in Russia, Nurmagomedov is the first Muslim to win a UFC title. He is the most-followed Russian on Instagram, with more than 33 million followers as of February 2022. He is also a mixed martial arts (MMA) promoter, known for promoting the Eagle Fighting Championship (EFC). Since retirement, he has transitioned to a mixed martial arts coach and cornerman.