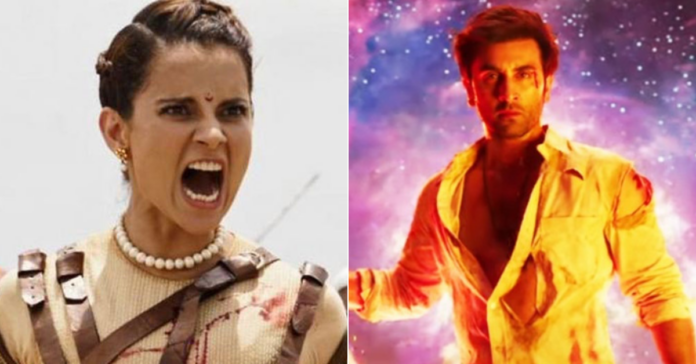 Kangana Ranaut targeted the box office collections of ‘Brahmastra‘ and said that they are projecting fake figures.

Ayan Mukerji’s ‘Brahmastra Part 1: Shiva’ has been raking in the moolah since it was released on September 9th, 2022. The worldwide two-day gross box office collection of the film is 160 crore rupees. However, Kangana Ranaut has declared the movie a ‘disaster’.

Kangana took to her Instagram Story to react to a negative review.

Taking to Instagram, the actress said that the profits of the film have been manipulated and are much less than the actual figures. She even said that the budget is more than what’s being reported. “Released on Friday and on Sunday it’s a big hit already and by the way made huge profits also. In ₹250 cr (that is also a fake figure). ₹650 cr (reported to be ₹410 cr) budget (including VFX). Just because Prime Focus is a co-producer doesn’t mean VFX doesn’t have any cost. Yeh Karan Johar mathematician ka maths…hum ko bhi seekhna hai (I also want to learn this maths by mathematician Karan Johar),” she posted on her Instagram story.

She also targeted Box Office India and said that they campaigned against her films but have declared ‘Brahmastra’ a hit in just one day. “This Box Office India handle has been harassing me and many like me because he is on the payroll of the mafia…Today he declared Brahmastra a big hit in one day, where according to him it has only earned ₹65 cr so far. He did a major smear campaign against Manikarnika (cost ₹75 cr…theatrical revenue ₹150 cr). He declared it a flop. Thalaivii ( ₹100 cr prerelease recovery) pandemic release…he declared it a disaster. Also, they did major harassment on Dhaakad failure and ticket sales. What you sow is what you reap. I am here now I want to understand these mathematics. I don’t do underhand conspiracies, I don’t backstab. I challenge openly and righteously,” she further added.

She also expressed her desire to interview Karan Johar and understand how the film has already become a hit. She wrote, “I want to interview Karan johar and understand why is he declaring gross collection of Brahmastra and not a net collection? What is desperation? Also after making ₹60 cr (that’s the net collection they have declared, I don’t believe in this number but the net amount in India is 60cr for two days according to them). Even if we believe them, how come ₹650 cr film emerged a hit already.”

“He took 12 years to make this film, he replaced 14 DOP he shot for more than 400 days for this film and changed 85 ADs, and burnt 600 crores to ashes. Also tried to exploit religious sentiments by changing the film name from Jalaluddin Rumi to Shiva last minute, because of Bahubali’s success…. Such opportunists, such creativity deprived people, success-starved greedy people if called geniuses then it’s not manipulation but a well thought of a strategy to call din ko Raat and Raat ko din,” she wrote.

“People like Karan Johar should be questioned for their conduct, he is more interested in everyone’s sex life than in his films scripts, he self admittedly buys reviews, stars, and fake collection numbers and tickets… this time around he tried to ride Hinduism and south wave … all turned Pujaris suddenly and begged south actors, writers, and directors to promote their film … they will do everything but not hire competent writer, director, actors, and another talent, why not in the first place hire those they went begging to fix this disaster called Brahmastra,” read Kangana’s note.

In one of her posts, Ranaut also claimed that Karan Johar ‘controlled media and jailed KRK’.

What do you think of this statement from Kangana Ranaut?