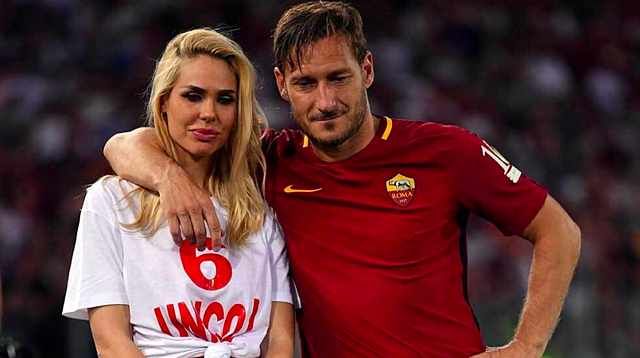 Francesco Totti, 45 divorced his wife TV presenter Ilary Blasi, 41, in July this year. The pair first met in 2002 before getting married three years later, and have three children together – Cristian, 17, Chanel, 15, and Isabel, six.

Totti said their relationship began to deteriorate when Ilary wasn’t there when he “needed her most”.

He now has a new partner, Noemi Bocchi, 34, but claims he was always faithful to Ilary. Totti admitted that he suffered from depression after his father’s death due to Covid-19 in 2020.

He also admitted that he heard “rumors” of his wife Ilary being unfaithful in September last year. Then, after looking at her phone, Totti claims he found evidence of her affair.

He told the Italian newspaper Corriere della Sera: “I have lived through a difficult period, first because I stopped playing and then my father died due to Covid.”

“I also had strong Covid for 15 days. However, my wife, when I needed her most, was not there.”

He said: “It is not true that I was the first to betray. I said I was not going to speak and I did not, but I have read too many hoaxes in recent weeks. Some have even made my children suffer.

“In September of last year, the rumors began to reach me: ‘Look, Ilary has another one. Indeed, more than one.’

“I had never done it in twenty years, nor had she ever done it with me. But when I received warnings from different people, whom I trust, I began to suspect.

“I looked at her cell phone and I saw that there was a third person, who acted as an intermediary between Ilary and another.

“Here was the evidence (of the affair). The facts. And that led me to depression.

“I could no longer pretend that nothing was happening, but it wasn’t me anymore, it was someone else. I got out thanks to Noemi.”

Totti went on to admit that he fears his divorce with Ilary will result in the pair going to court.

He said: “I fear that with Ilary it will end up in court. I still hope that we can reach an agreement.”

Blasi simply responded through her lawyer, Alessandro Simeone, as per Corriere della Sera: “I have always protected my children and I will continue to protect them.”
For more sports and entertainment news, follow us on Twitter and Instagram