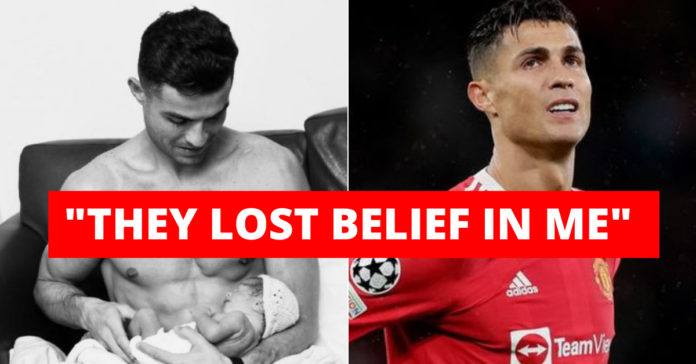 The club lost belief in me, Ronaldo said

Cristiano Ronaldo has accused Manchester United bosses of not showing empathy when his daughter was taken ill in July.

In his interview with Piers Morgan, which is being released on Wednesday and Thursday, Ronaldo said: “I spoke with the directors and president of Manchester United and they kind of didn’t believe that something was going wrong which made me feel bad.”

“They believed it but it’s something that really hurt me because they doubted my words.”

“We had one week in the hospital because Bella had big problems and I didn’t go to the pre-season because of that.”

The club left me feeling ‘hurt’ and ‘bad’, says Ronaldo

“I spoke with the director and the president of Man Utd and they kind of didn’t believe that something was going wrong, which made me feel bad,” Ronaldo said in an interview with Piers Morgan for TalkTV.

“I am never going to change the health of my family for football. Now, or 10 years behind or forward.”

Glazers don’t care about the club

‘The owners of the club, the Glazers, they don’t care about the club,’ he said. ‘I mean, professional sport, as you know this, Manchester (United) is a marketing club. They will get its money from the marketing – the sport, they don’t really care, in my opinion.’

‘You have some things inside the club which don’t help Manchester (United) reach the top level as City, Liverpool and even now Arsenal, for example… which is complicated, it’s difficult.’

‘It’s hard, in my opinion, it will be hard for Manchester (United) to be at the top of the game in the next two, three years.’

Ronaldo also urged fans to continue their protest against the Glazers’ ownership.

He said: ‘The fans, they’re always right. I think the fans should know the truth – should know that the players… we want the best for the club.