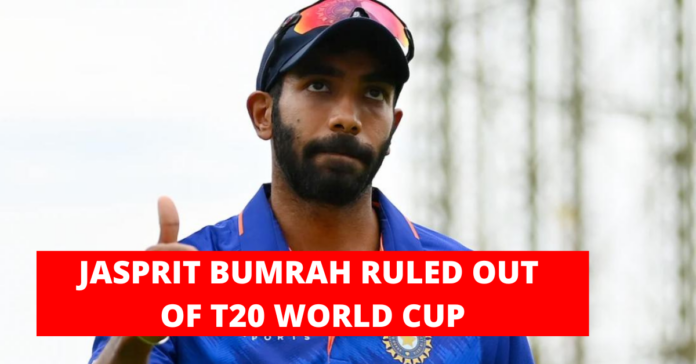 A BCCI official told PTI that Jasprit Bumrah has a stress fracture and could be out of action for months.

“Bumrah is not going to play the T20 World Cup for sure. He has a serious back condition. It’s a stress fracture and he could be out for a period of six months,” a senior BCCI official told PTI on conditions of anonymity. No surgery will be required but Bumrah is expected to take time of 4-6 months to recover from the injury.

As per sources, he has not traveled with the team to Thiruvananthapuram where the first T20I took place between India and South Africa, and has been ruled out of the series

Bumrah had earlier missed the entire Asia Cup 2022 due to a back injury. He spent around a month at National Cricket Academy in Bengaluru to recover, post which he was selected for the T20Is vs Australia. He missed the first T20I at Mohali but played the remaining 2 matches.

The 28-year-old fast bowler was named among a four-man pace bowling attack for the T20 World Cup in Australia, which featured Bhuvneshwar Kumar, Arshdeep Singh, and Harshal Patel

Mohammed Shami or Deepak Chahar, who have been announced as standby players could be the possible replacements for Jasprit Bumrah

Team India faced another severe blow this month when all-rounder Ravindra Jadeja was ruled out of the T20 World Cup with a knee injury.  Axar Patel stepped up with consistent performances in India’s recent T20I outings against Australia and South Africa.

Who do you think should replace Jasprit Bumrah in the T20 World Cup? Let us know