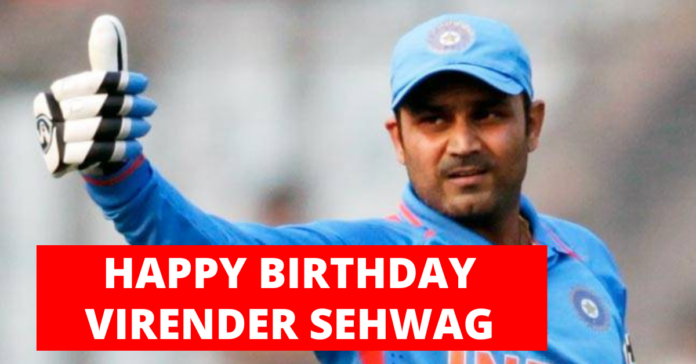 On the occasion of Virender Sehwag’s birthday, let us have a look at his five best knocks for Team India.

Virender Sehwag is a former Indian cricketer. He represented India from 1999 to 2013. He played for Delhi and Haryana in Indian domestic cricket. He played as an aggressive opening batsman throughout his playing days.

Widely regarded as one of the most destructive batsmen of all time. Sehwag played as an aggressive right-handed opening batsman and also bowled part-time right-arm off-spin.

Here are the Top 5 knocks by Virender Sehwag

It was India’s first tour to Pakistan in 15 years. The tension was high across the border, but ‘The Nawab of Najafgarh’ stayed calm and became the first-ever Indian to score a triple-hundred, on the second day of the first Test at Multan. Pakistan, despite having the likes of Shoaib Akthar, Mohammad Sami, and Saqlain Mushtaq, couldn’t control Sehwag.

At Melbourne, India lost the match as Australia leveled the series. But Sehwag’s resplendent 195 off 235 balls with 25 fours and five sixes will remain etched in memory. On 195, he went for a six off Simon Katich to complete the 200 but was grabbed by Nathan Bracken at deep. His dismissal also changed the course of the game as Australia went on to level the series

On December 8, 2011, Virender Sehwag recorded the highest-ever individual score in ODI cricket, by smashing a 149-ball 219 against West Indies. He surpassed Sachin Tendulkar, who scored an unbeaten 200 against South Africa at Gwalior. It was only the second time that a player had scored a double-century in ODIs. Sehwag’s knock helped India amass 418/5 in 50 overs, their highest score in ODI cricket to date.

On March 11, 2009, Virender Sehwag scored the fastest ODI hundred by an Indian, off just 60 balls. Chasing 271, Sehwag’s blitz meant India was coasting and they reached 200 in just the 24th over of the innings before rain ensured that no further play was possible. Sehwag remained unbeaten on 125 off 74 balls as India won the match by Duckworth-Lewis method.

England set India a daunting target of 387 in the first Test match. History was on England’s side as well because India had never, until then, chased so many to win a Test. Enter Virender Sehwag, who smashed the England bowlers to all corners and raced to 50 off just 32 balls. The visitors were so taken aback by Sehwag’s onslaught that they ran out of ideas. By the end of day 4, the opening batsman had given India a great platform to chase down the target. The importance of his knock was so much so that he was awarded the Man of the Match award despite an unbeaten ton by Sachin Tendulkar in the same innings.