R Ashwin explains the logic behind sniffing to select his jersey 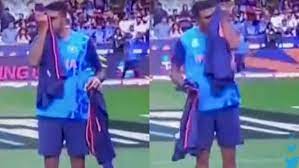 Ravichandran Ashwin has clarified the viral video going around, where he can be seen sniffing jerseys in order to check which one is his.

As the video was widely shared on Twitter, legendary Indian spinner Harbhajan Singh poked fun at him. “Ash what are u smelling,” wrote Harbhajan Singh on the micro-blogging site. Ashwin’s long-term team partner Abhinav Mukund also tweeted “Watched this video multiple times already. Just cracks me up, again and again, @ashwinravi99. pls enlighten us with your logic of picking the right sweater,” said Mukund on Twitter.

Ravi Ashwin gives a hilarious reply to the incident

Ashwin finally broke his silence and explained his strange actions in a hilarious manner stating that he could only identify his kit by the smell of his perfume. “Checked for the sizes to differentiate!❌ Checked if it was initialed❌ Finally checked for the perfume I use✅. Adei cameraman,” wrote Ashwin on social media.

Ashwin returned figures of 3 for 22 in his four overs against Zimbabwe, while he didn’t get the opportunity to bat in the game.  India defeated Zimbabwe by 71 runs at the Melbourne Cricket Ground on Sunday to set up a semi-final clash with England in the T20 World Cup. Defending 186 for 5, India bundled out Zimbabwe for 115 runs in 17.2 overs as Ashwin starred with the ball.

Chasing 187 runs against a quality Indian attack was no easy task and Zimbabwe’s run chase was derailed by an early loss of wickets. The African side had lost half of their side with just 36 runs on the board. Ryan Burl and Sikandar Raza stitched an important partnership. Burl was dismissed for 35 runs off 22 balls, while Raza got out for 34 runs off 24 balls