Shoaib Akthar engage in war of words with Mohammed Shami 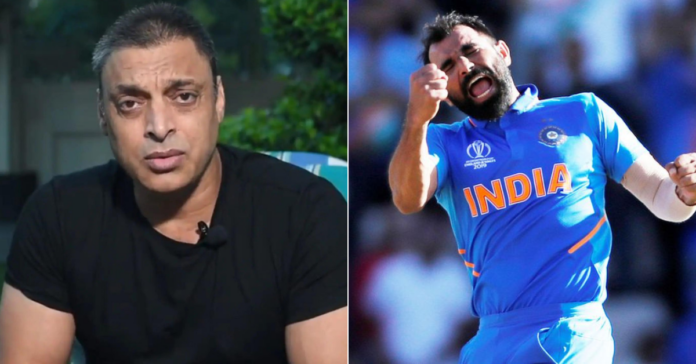 A Twitter spat broke out between Akthar and Shami

After the T20 World Cup final between England and Pakistan yesterday, an argument broke out between Mohammed Shami and Shoaib Akthar on Twitter. After Pakistan failed to defeat a 137-run total in the title clash in Melbourne, Akhtar tweeted an emoji of a heart-break on his Twitter account.

Indian pacer Mohammed Shami responded in a sly manner after Akthar had passed some remarks after India was eliminated from the T20 World Cup, Shami wrote “Sorry brother. It’s called karma,” Shami reacted after Akhtar shared a tweet with a heartbroken emoji.

Akhtar has hit back at the Indian pacer. “And this what you call sensible tweet..,” Akhtar responded to Shami’s ‘karma’ post. He also attached a post from Indian commentator Harsha Bhogle where Bhogle is seen praising Pakistan bowling. He tweeted: “Credit to Pakistan. Few teams would have defended 137 the way they did. Best bowling team.” Akhtar’s response also went viral.

Akthar backs Pakistan to win the next World Cup

Akhtar also backed Pakistan to win the next edition of the ICC World Cup in India. “Well done Pakistan bowling. You have done well throughout the World Cup and got Pakistan to the final. There was luck involved but you have played well Pakistan,” Akhtar said in his video message.

“We are cricketers, we are ambassadors and role models. We should try to end all of this. We are neighbors. Aisi cheezein nahi honi chahiye jisse nafrat faile logo ke beech me. Agar ham hi aisa karenge to aam aadmi se ham kya ummeed rakhenge (We shouldn’t do things that cultivate hate. If do such things, what can we expect from others). Our relationships improve with sports. We want to play with them, see them play in Pakistan,” Afridi said during the discussion with Saama TV

“Even if you are retired, you shouldn’t do this. But you are a part of the current team, you should avoid such things,” he added.