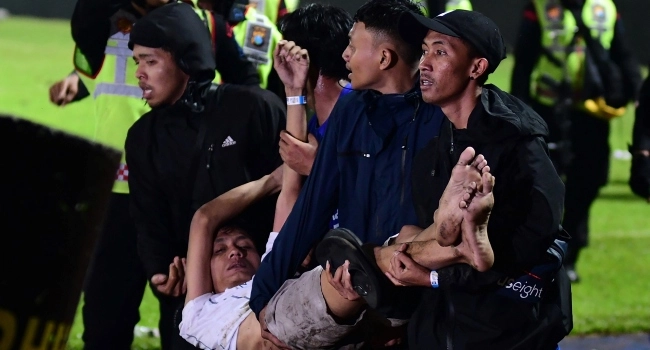 Police in East Java province said thousands of fans of Arema FC stormed the pitch at Kanjuruhan Stadium in Indonesia after their team lost 3-2 to Persebaya Surabaya.

The tragedy occurred in the eastern city of Malang, police used tear gas to quell a pitch invasion, authorities said on Sunday, in one of the world’s worst stadium disasters.

During an Indonesian Premier League game, the incident occurred inside the Kanjuruhan Stadium in East Java province’s Malang city. East Java police chief Nico Afinta told reporters that officers fired tear gas in an attempt to control the situation after supporters of the losing home team invaded the pitch to express their frustration, reported Reuters. “It had gotten anarchic. They started attacking officers, they damaged cars,” Nico said.

Fans invade the pitch after the home team’s loss

Video footage from local news channels showed fans streaming onto the pitch in the Kanjurujan Stadium in Malang after Arema FC lost to Persebaya Surabaya.

The stadium holds 42,000 people and authorities said it was a sell-out. Police said about 3,000 people had stormed the pitch. Vehicles outside the stadium were also torched, including at least five police cars and trucks, reported AL Jazeera

“PSSI regrets the actions of Arema supporters at the Kanjuruhan Stadium. We are sorry and apologize to the families of the victims and all parties for the incident. For that PSSI immediately formed an investigation team and immediately left for Malang,” the statement read.

League suspended in Indonesia after a disaster

President Joko Widodo ordered an investigation into the tragedy, a safety review into all football matches, and directed the country’s football association to suspend all matches until “security improvements” were completed.

“I deeply regret this tragedy and I hope this football tragedy will be the last in our country,” Widodo said. Meanwhile, FIFA President Gianni Infantino said the football world was “in a state of shock”.

“All our thoughts and prayers are with the victims, those who have been injured, together with the people of the Republic of Indonesia,” he added.